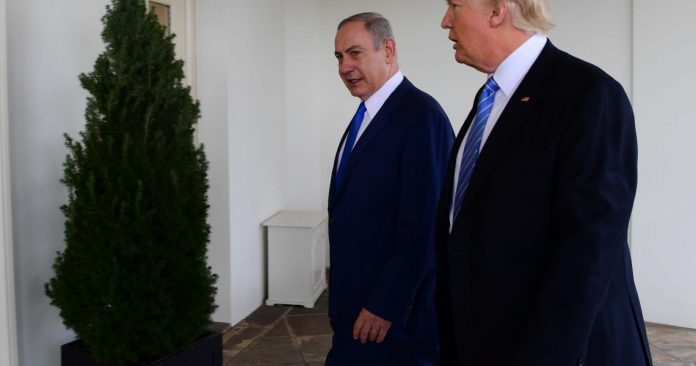 The White House categorically denied it had discussed a proposal for Israel to annex settlements in the West Bank, after Israeli Prime Minister Benjamin Netanyahu said he had raised the idea in talks with US officials.

Netanyahu told a Likud party meeting on Monday morning that he had been in talks with the White House over a “historic” initiative to annex Israeli settlement areas in the West Bank. He said he was “guided by” having “optimal coordination with the Americans” on the issue, calling Israel’s relationship with the US “a strategic asset for Israel and the settlement movement”.

A White House spokesperson was swift to deny Netanyahu’s claim, saying: “Reports that the United States discussed with Israel an annexation plan for the West Bank are false.” A White House statement later clarified that in their discussions with Netanyahu, “Israel updated the US on various proposals that are being brought up in the Knesset, and the US expressed its clear position that it hopes to present President Trump’s peace plan”.

Netanyahu was criticised by opposition MKs, with Zionist Union MK Tzipi Livni calling his actions “classic Bibi”. “Instead of getting involved with the US in lies, the head of a responsible Government should mobilise the Americans to deal with Iran and Syria,” she said.

The Prime Minister’s statement to Likud followed his move to block a new bill on Sunday which aims to apply Israeli sovereignty to settlements in the West Bank. The legislation is sponsored by MKs Yoav Kish of Likud and MK Betzalel Smotrich of Jewish Home. A similar proposal was approved by the Likud Central Committee a month and a half ago.

In a recent interview with Israel Hayom, US President Donald Trump said that he is “not necessarily sure that Israel is looking to make peace”. Trump also said that “Israel has to be very careful with the settlements,” adding that they have “always complicated making peace”.