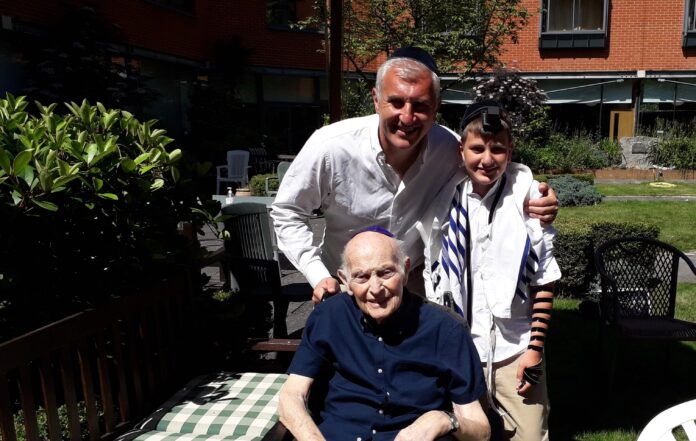 Will Gordon’s grandparents, Malcolm and Dorothy Gordon, were able to hear their grandson read his Bar Mitzvah piece in the garden of Jewish Care’s Lady Sarah Cohen House at the end of June. The sun shone for the family in the beautiful garden at Lady Sarah Cohen House creating a magical moment, which was possible as restrictions had lifted. Malcolm, 86, recently moved to the home where his wife, Dorothy, who is living with Alzheimer’s, has lived for six years.

Will read his sedra and haftorah for his Bar Mitzvah which will be in September, so that his Papa Malcolm and Nana Dorothy who are residents at the home could hear him. Will’s grandpa Ray was also there to him along with aunts and uncles and the service was led by Rabbi Baruch Levine of Brondesbury Park Synagogue, where the family are members, together with Rabbi Junik, Jewish Care’s spiritual and pastoral.

“Being able to have the Bar Mitzvah has come at the right time for us, it’s lovely to all be together,” said Papa Malcolm. Rabbi Levine, who was officiating for the family, asked Malcolm to give advice to his grandson, to which Malcolm answered, “always be nice and gentle to people.”

After the outdoor service, Will’s parents, Steve and Naomi Gordon, said, “We had the most wonderful morning celebrating Will’s barmitzvah surrounded by our family in the grounds of Lady Sarah Cohen House. Will has made us very proud and after many months apart, it was a deeply moving and joyful ceremony. An occasion we will never forget and we are truly thankful to Jewish Care for making this happen.”

Rabbi Junik, “After such a long difficult year it was a really moment of joy to have three generations come together and being able to celebrate Will’s Barmitzvah with the family Simcha was really uplifting for the grandparents, giving them a tremendous boost. We are very grateful to have this window of opportunity and it is a moment of light within the Jewish Care premises, giving us encouragement towards a brighter future for life returning to normal for our residents.”