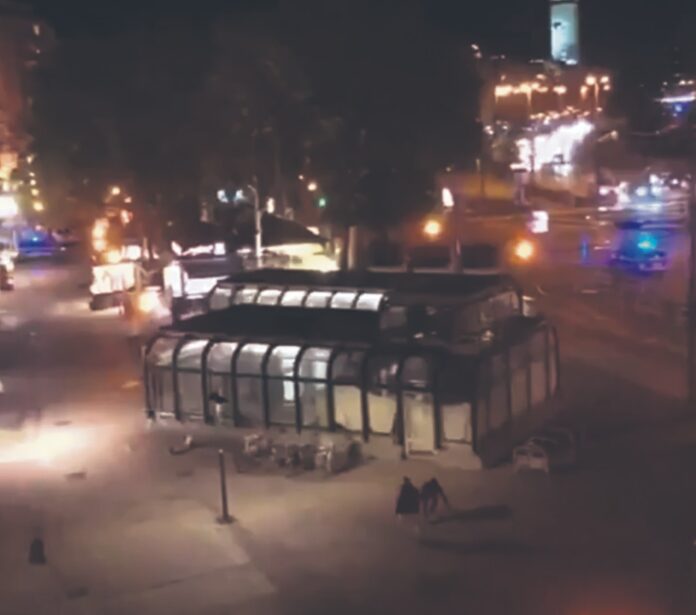 World Jewish Congress has called for justice in condemning terror attacks in Vienna and Paris.

News on the Austria incident is still emerging but a manhunt is ongoing after an Islamic State “sympathiser” murdered at least four people and wounded 17 on Monday night.

“Our thoughts are with the victims of the horrific attack in Vienna and with all Austrian citizens.” noted a statement. “Sadly, what we are witnessing has become all too common.

“Over the past month, we’ve seen a disturbing rise in extremist Islamist violence on the streets of Europe. Moreover, it appears that a number of these recent deadly attacks have targeted places of worship. No one should live in fear as they practice their religion or live their daily lives.”

A spokesman added, “The attack began outside of a synagogue. It is horrifying to think what might have been if the building wasn’t empty and locked.”
WJC blasted last week’s attack near the Basilica of Notre-Dame de L’Assomption in Nice where an attacker stabbed three people to death.

The French antiterrorism prosecutor has opened an investigation. The assault follows the murder of French high school teacher Samuel Paty.

WJC President Ronald S. Lauder noted, “This attack, targeting a place of worship, goes against all the values of liberté, égalité et fraternité that the French Republic represents. I express my sincere condolences to the families who lost their loved ones and to the Niçois Catholic community.

WJC stands in solidarity with the people of France and the Representative Council of Jews of France (CRIF).”

Lauder added, “As Jews, we unfortunately know only too well what it feels to be unsafe in our places of worship. All worshippers must be able to practice their religion freely without fearing for their lives in their houses of prayer.”

In other news, United Nations Secretary-General António Guterres is to receive WJC’s highest honour, the Theodor Herzl Award on Monday.

Former US Secretary of State Henry Kissinger will pay tribute to Guterres.

Established in 2012, the award recognises outstanding individuals who work to promote Herzl’s ideals through international support for Israel and enhanced understanding of Jewish history, culture, and peoplehood.

Zubin Mehta, music director emeritus of the Israel Philharmonic Orchestra, will be presented with the WJC’s fifth Teddy Kollek Award for Advancement of Jewish Culture.

Due to COVID-19 restrictions, this year’s award will be presented during a virtual gala.

Lauder noted the role played by US President Donald Trump and his administration in facilitating “another important step” toward a new Middle East.

“Sudan has undergone a profound transformation over the past few years, from a haven for terrorists to a constructive member of the family of nations,” he reportedly commented. “This transformation is the result of the determination and fortitude of Sudanese citizens, who are now laying the groundwork for a future in which their country will enjoy the blessing of peace and prosperity.”

Lauder added, “The forthcoming establishment of bilateral Sudanese-Israeli ties, following on the heels of Israel’s agreements with the United Arab Emirates and Bahrain, is emblematic of shifting societal attitudes towards Israel and towards Jews in the region.”

“WJC is ready to work with the Sudanese government to weave Jewish voices and experiences into Sudan’s already rich and diverse cultural tapestry,” he noted.

In other WJC news, Lauder welcomed social media giant TikTok’s taking “concrete action” regarding the spread of anti-Semitism and other hateful ideologies on its platform.

“Our younger generations are getting their knowledge and information from users on these platforms, and spend so much time on them, which further puts the onus on social media companies to protect their users from hate directed against them, and to ensure they are not being used to spread blatant misinformation,” he reportedly explained. “As TikTok mentioned in their announcement, eliminating hate from TikTok ‘is a tall mountain to climb.’ I’m not sure we will ever reach the peak, but we must not rest on our way there. We look forward to learning more about these changes and to working with TikTok to ensure their proper implementation on the platform.”

WJC has communicated with TikTok over anti-Semitic and Holocaust-mocking videos on its platform.

WJC, meantime, has joined with House of Representatives members, the American Association of Jewish Lawyers and Jurists (AAJLJ) and Hadassah in a Supreme Court case involving property purchased by Nazi agents from German Jews in 1935.

Descendants are seeking, under the 2016 Holocaust Expropriated Art Recovery Act, restitution from the German government for the medieval art Guelph Treasure collection.

Each case claims the sale constitutes part of the Nazi genocide of the Jewish people which falls within US jurisdiction and should not be dismissed under foreign sovereign immunities legislation.