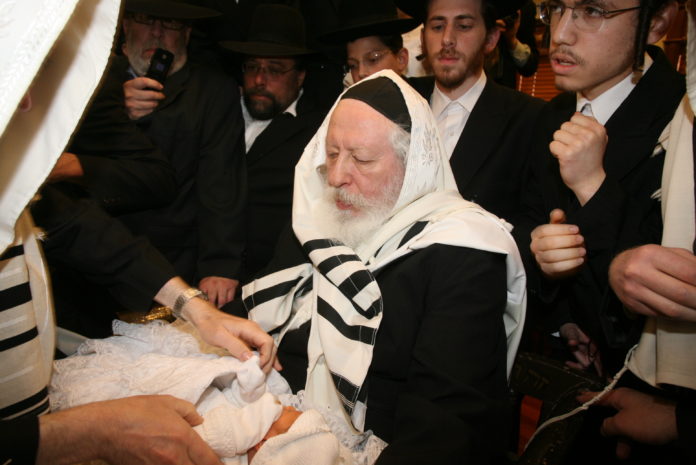 World Jewish Congress has backed the Jewish Central Council of Sweden’s stance on condemning a decision by the Center Party Conference to progress a ban on circumcision.

Both bodies have called for dialogue with the party.

“Circumcision is a central tenet of life and ritual for Jews and Muslims alike, and must be maintained as an indelible religious right in Sweden and everywhere in the world,” said WJC President Ronald S. Lauder. “Prohibiting any citizen from circumcising their sons as has been the practice of their ancestors for thousands of years is tantamount to decreeing an end to the future of their religious life in this country.”

He added, “We cannot sit idly by as such attacks are unleashed on our communities and our customs. The freedom of religion and belief is one of the most critical foundations in the principle of democracy everywhere. We must not let this freedom be destroyed.”

In other news, WJC mourned the passing of former President of the French Republic Jacques Chirac last week.

One of the most recognised political figures in the world, the 86-year-old spearheaded his country’s acceptance of its role in the Holocaust.

Chirac recognised his country’s role specifically in the deportation of Jews to death camps.

Lauder described Chirac as a “true tour de force” among European leaders for taking it upon himself to deal with his country’s past in recognising France’s “dark history” in aiding Nazi Germany in the oppression and murder of Jews during the Holocaust.

He added, “Mr. Chirac understood that burying these crimes ran in direct contradiction to the essential values of liberté, égalité, and fraternité upon which the French Republic was founded.”

Lauder said he would remember Chirac as a “friend of the Jewish people, as a champion of democracy and national unity”.

French president Emmanuel Macron said Chirac, who died last Thursday surrounded by his family, as “a great Frenchman” and that he “protected France from extremism and hate”.

For French Jews, his speech at the Vel d’Hiv deportation memorial in July 1995 was a historic moment as prior to that moment France accepted no responsibility for the actions of Nazi Germany during the Second World War.

Chirac did however face criticism from the French Jewish community a year after attending the funeral of former Israel leader Yitzhak Rabin for opposing Jewish settlements in the West Bank and Gaza Strip.

This was most apparent when he visited the old city of Jerusalem in 1996.

“Unfortunately, it comes as no shock that the same institution that hosted the Jew-hating president of Iran, Mohamoud Ahmadinejad, will be hosting the unabashedly anti-Semitic Prime Minister of Malaysia,” President Ronald S. Lauder reportedly said in a statement to the New York Post.

Referring to Mohamad’s address on the Columbia campus in 2007, he added, “It is nothing short of astounding that a university that prides itself on being a place of tolerance and inclusion will be handing the microphone over to a leader who has described Jews as ‘hook-nosed.’

Lauder added that Mohamad had been quoted as saying ‘Europeans killed six million Jews out of 12 million. But today the Jews rule this world by proxy. They get others to fight and die for them.’

“This form of open engagement can sometimes be difficult, even painful. But to abandon this activity would be to limit severely our capacity to understand and confront the world as it is, which is a central and utterly serious mission for any academic institution,” Bollinger reportedly said.

He added, “I find the anti-Semitic statements of Prime Minister Mahathir to be abhorrently contrary to what we stand for, and deserving condemnation. Nevertheless, it is in these times that we are most strongly resolved to insist that our campus remain an open forum and to protect the freedoms essential to our university community.”

“Columbia University should be ashamed of themselves,” he said. “It is no surprise that incidents of anti-Semitism are on the rise in New York City when it is being preached from the stages of one of its premier universities.”

Away from the UN General Assembly, WJC hosted Austrian President Alexander Van der Bellen and Spanish Foreign Minister Josep Borrell in New York. The meeting with President Van der Bellen at his Neue Galerie in Manhattan focused on a recent decision of the Austrian Parliament to grant citizenship to Austrian Jews expelled by the Nazis and their descendants.

Lauder described the development as a positive move for Austria and Jewish people.

The Austrian Citizenship Act was adopted last month and takes effect in 12 months.

Topics discussed with Foreign Minister Borrell included the rise of anti-Semitism and Spain’s relations with Israel.

Borell has been nominated for the post of EU High Representative for Foreign Affairs and Security Policy and is expected to take up the role next year.

Noting Spain is proud of its Jewish heritage, Boreel said anti-Semitism in Spanish society is less than in other countries of the European Union although the Spanish government is considering adding anti-Semitism and genocide denial to its penal code.

With regard to Spain’s offer of citizenship to descendants of Jews expelled in the Inquisition, Borrell confirmed 4,000 people had been approved with 6,000 applications pending.

Borell also said the government expects to extend the deadline which expires this month but a final decision falls to the new government and parliament. As for the Palestinian-Israeli conflict, he noted the official position of his government is to support a two-state solution.

Findings of a United Nations report identifying anti-Semitic-motivated violence as “toxic to democracy and mutual respect” will be presented to the UN General Assembly later this month.

The religious intolerance report calls for states to adopt the International Holocaust Remembrance Alliance universal definition of anti-Semitism as a global guide for identifying, monitoring and responding to incidents of anti-Semitism.

It also calls for the adoption of a “human-rights based approach” to combat the hatred of Jews.

“Anti-Semitism is a virus that is rapidly spreading throughout the world,” he noted. “We hope this report serves as an eye-opener to the United Nations and its member states and that they finally take concrete action to stem the surge of antisemitism across the globe.”

WJC Combating Antisemitism commissioner Julius Meinl described the report as a “wake-up call” about anti-Semitic hatred around the world.

“Anti-Semitism does not only target Jews but democracy as a whole,” he noted.

WJC contributed material to the report from affiliated communities and participated in regional consultations ensuring concerns facing Jewish communities were taken into account.