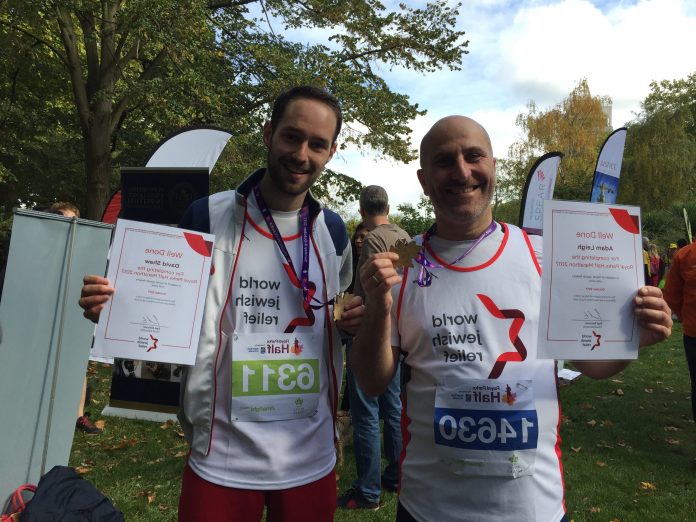 World Jewish Relief’s team of runners raised more than £11,500 for the charity in the 10th Royal Parks Half Marathon on Sunday (8 October 2017). Cheered on by family, friends and World Jewish Relief’s chief executive, they joined 16,000 other runners on a scenic route through London’s Royal Parks including Hyde Park, Green Park and St James’ Park. The sun shined and they were greeted at the end with snacks, smiles and certificates. The money raised will go to support World Jewish Relief’s work supporting older Jews in Eastern Europe.
Adam Leigh, one of World Jewish Relief’s trustees said, “I can honestly say that the Royal Parks Half Marathon was the greatest two hours in my 52 years on planet earth… it’s an in-credible run… It’s for such an important cause and such a terrific experience.”
David Shaw said, “I feel exhausted, but I feel great. I feel happy to have supported such a great cause. To anyone who wants to complete a challenge event for World Jewish Relief: Do it! It’s worth it.”
Tamir Grant said, “Great crowd, support and weather, looking forward to food and sleeping until 2018.”
Paul Anticoni, World Jewish Relief’s Chief Executive, says, “I am so proud of our runners having trained so hard, giving their all and wearing our t-shirts for a wonderful event in the most pleasant of surroundings. They all looked so spritely, while pushing their bodies to the limit in support of World Jewish Relief’s work. A big thank you also to family and friends who turned up to support those running.”
A big thank you to all of our runners: Jessica Bohm, Tamir Grant, Max Heller, Robin Hilton, Adam Leigh, David Shaw