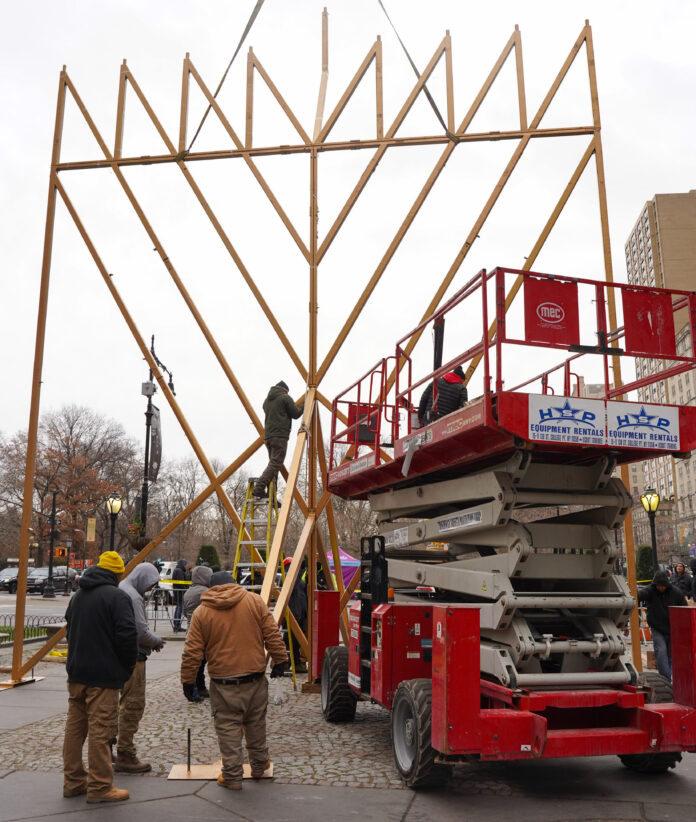 The world’s record breaking menorah in New York City is brightening up the Big Apple again for Chanukah.

They were hosted by Rabbi Shmuel M. Butman, director of Lubavitch Youth Organisation and joined by property developer Rotem Rosen.

The menorah is on Fifth Avenue and 59th Street at Grand Army Plaza near Central Park outside of the Plaza Hotel.

Nightly lightings will take place at the towering 36-foot menorah, ratified by the Guinness World Records, with live music with Chassidic dancing.

Following a recent surge of antisemitic incidents in the city organisers are hopeful New Yorkers will embrace Chanukah’s message of light and hope and ensure hate never prevails.

em harm,” said Rabbi Butman. “When faced with darkness, this menorah serves as a symbol of the city’s dedication to persevering and celebrating all its citizens. This year, we’re shining that great symbol ever so bright.”

This year’s festivities include a ‘Full Light on Chanukah’s Last Night’ on Sunday.

“Our celebration will be even bigger and more comprehensive than we’ve done before,” noted Butman. “We are excited to be celebrating Chanukah and show the world even a little light can overcome much darkness.”

A central theme of the festival is to publicise the Chanukah miracle. The festival has become a mainstay of Jewish cultural and religious life in New York City and around the world.

Chabad-Lubavitch this year will set up some 15,000 large public menorahs in over 100 countries including Trafalgar Square. the White House in Washington and Eiffel Tower in Paris.

Chabad have also distributed 700,000 menorah kits along with 2.5 million Chanukah holiday guides in 17 languages to homes, schools and businesses globally.

And some 5,000 menorah-topped cars will be driven around cities, towns and rural areas.

Chabad’s online presence is continually growing with a vast amount of material. Over 10 million visitors are expected to view a plethora of guides.

New York City Mayors Ed Koch, Rudolph Giuliani, Michael Bloomberg, Bill de Blasio, US Senator Charles Schumer and governors Mario Cuomo, George Pataki and David Paterson are among dignitaries to light the menorah at the landmark site. The menorah was designed in 1986 by Israeli artist Yaacov Agam and inspired by a hand drawing by Maimonides of the original menorah in the Holy Temple of Jerusalem.

The annual New York City tradition is part of a worldwide campaign to promote observance of Chanukah, an initiative launched in 1973 by the Rebbe, Rabbi Menachem M. Schneerson.

“There is a pre-eminence in the mitzvot connected with lighting candles, in that the effect of the action, the appearance of light, is immediately visible,” the Rebbe explained in a famous 1973 letter.

“The mitzvah of kindling the Chanukah light is unique in that it is required to be displayed to the outside. Thus, every by-passer, including non-Jews, immediately notices the effect of the light, which illuminates the outside and the environment.”

Twelve months after his letter, the first public menorah was seen outside Independence Hall in Philadelphia. A 25-foot menorah was set up in Union Square, San Franciso in 1975. A menorah lighting has taken place at Grand Army Plaza since 1977.

Almost 50 years on from the Rebbe’s Chanukah wishes Chabad-Lubavitch emissaries are continuing his call to light up the world.

The Rebbe concluded in his famed letter, “May G-d grant that everyone of us be truly inspired by the teachings of Chanukah and of the Chanukah Lights, and translate this inspiration into actual deeds, in our everyday life and conduct.”