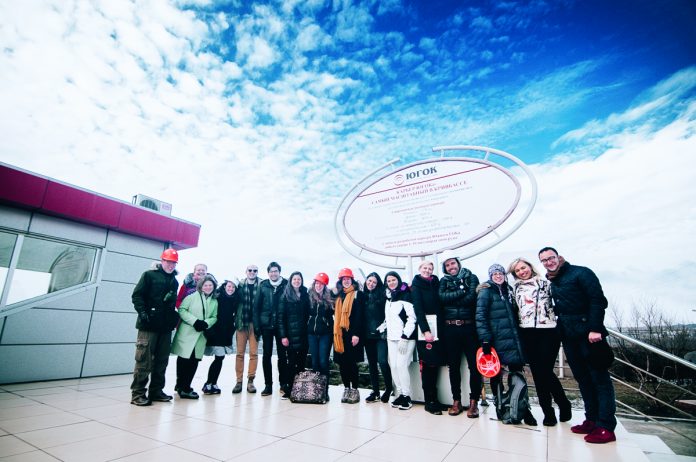 Ten British Jews have returned from Ukraine on World Jewish Relief’s latest Insight trip to see first-hand the support which the charity offers Jewish communities struggling to make ends meet.
The group, led by World Jewish Relief’s Young World Jewish Relief Coordinator, Sam Schryer, visited Kryvyi Rih, a post-industrial town in Eastern Ukraine which has been hit hard by the financial crisis and decline of the manufacturing industry.
Participants learned about World Jewish Relief’s life-changing Livelihoods work which helps unemployed Jewish people find sustainable jobs to lift their families out of poverty for good.
Attendees also met people whose family members had been killed in the war in the East of the country. Nearly 10,000 people have died since the conflict began in 2014, including thousands of civilians.
The group spent time in Dnipro, meeting older Jews who come together every week as part of World Jewish Relief’s ‘Warm Homes’ programme and Jewish people with disabilities who are supported by the charity.
Participants also visited the Tkuma Centre of Jewish History and the Holocaust.
Andrew Davidson, one of the participants on the trip from Barnet, said: “Apart from a reminder of how much we take for granted in the UK, the trip left me with a great feeling of warmth and respect for the people that we met throughout. I also was astounded by how valuable and effective World Jewish Relief’s projects I saw seemed to be.”
Sam Schryer, Young World Jewish Relief Coordinator, said: “It was truly inspiring to see ten young Jews from London engage so diligently and sensitively with the complex issues facing the Jewish communities in Ukraine. We met some amazing people on the way and I am proud to work for a charity that has so many young people who care about the future of Eastern European Jewry.”
Young World Jewish Relief will be running another Insight trip to Eastern Europe in autumn 2018. For more information please contact Sam Schryer, sams@worldjewishrelief.org