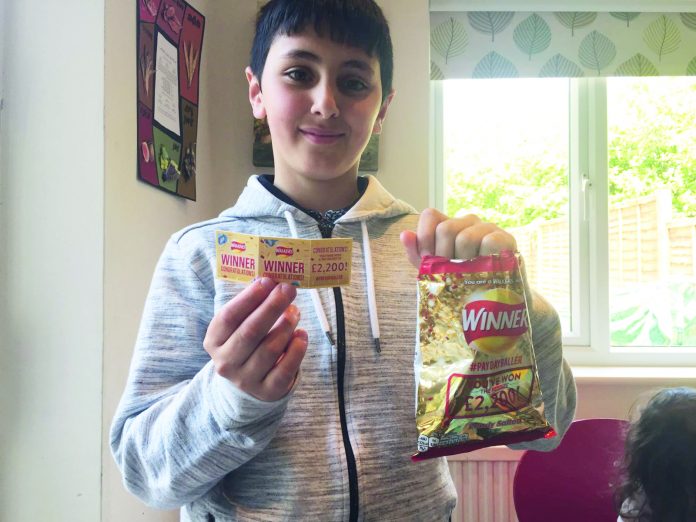 Noam Levi, a Year 6 pupil In Hasmonean Primary School, has won £2200 from a golden ticket found in a bag of Walkers ready salted crisps.

On Sunday morning, Noam opened his bag of crisps hoping that it would nourish him through till lunch; yet to his utter delight saw a golden ticket that could nourish him for a lot longer!

Noam, who lives in Edgware and is an avid football player, told The Jewish Weekly how he “can’t believe” that his packet was one of just 84 winning packets in the UK to contain the golden ticket.

Mum of five Elda didn’t believe him when he told her either.

“I thought he was just playing a joke on me, but when he showed me the ticket and I had a proper look I was really taken back; £2200 is a lot of money for an 11-year-old. I’m just so thrilled for him!”

Noam said that he wants to do a few things with his winnings. He mentioned that he wanted to use some of the money for charitable activities, one of which was to feed a homeless man for a week. He would also like to pay for someone’s shopping in a shop if they cannot afford it.

His mother has insisted that he needs to make a bucket list “as that way, the money won’t run out too quickly and he can make sure that everything he really wants to do with it is done. These days money goes so quickly; we don’t want him using it all up too fast. It is important for him to prioritise and really spend it on what’s important.”

Noam is planning to celebrate with his classmates by supplying them with chocolate for their school end-of-year-trip.