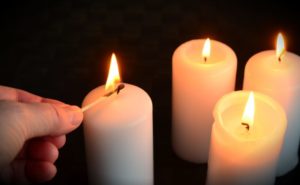 Esther Deutsch is the fourth victim of a tragic car crash in New Square state, New York earlier this month.

Ten people were traveling to a simcha when their 2009 Ford Econoline veered off a road and struck a tree.

Rabbi Birnhak’s wife, seriously injured but now recovering, gave birth to a baby boy 24 hours after the crash who was placed in an incubator.

The Skverer Rebbe, who joined hundreds of mourners at funerals in New Square, will officiate at a bris in a few weeks.

An emergency fund established by the Skverer Kehilla to support the eight surviving Birkhak children, now orphaned, has generated $2.1m towards a target of $2.2m. Initially the target was $400,000.

Hatzolah paramedics arrived at the scene on June 15 where they discovered a number of trapped passengers. Hillcrest and New City Fire Departments assisted in cutting passengers from the van.

Injured passengers, some critical, were taken by Hatzolah and Spring Hill Ambulance to Nyack Hospital and Westchester Medical Center.

A number underwent emergency surgeries, they have now returned home.

Police and the local Sheriff’s Office are investigating the crash.