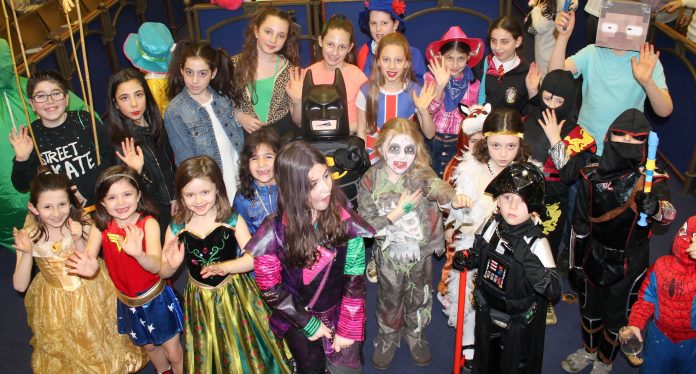 ORTHODOX synagogues in Leeds organised a joint programme of events for the first time to celebrate Purim.

Festivities kicked off at United Hebrew Congregation with a Megillah reading followed by a buffet prior to rock band Shlock Rock wowing a packed house on Saturday night.

The initiative then moved on to a parallel feast for children and adults at Etz Chaim Synagogue on Sunday afternoon.

Aside from a fancy dress parade, children participated in an arts ‘n’ crafts workshop and then joined parents for entertainment provided by street entertainer Maynard Flip Flap.

During the afternoon, at Beth Hamidrash shul, Sagi Yechezkal also facilitated a youth programme that included an ‘escape room’ activity.

“The programme exceeded our expectations,” said Claire Brown, who was a member of the organising committee.

“The numbers were greater than we had hoped and we were pretty much at capacity.

“During the Megillah reading on Saturday night the roof was raised when Haman’s name was mentioned; the atmosphere was amazing.

“At each event there was a critical mass of people that built momentum.”

“We wanted to bring the community together for Purim,” added Beth Hamidrash minister Rabbi Jason Kleiman.

“Families wanted to be part of a united celebration, and we achieved that objective beyond our hopes.

“We didn’t know how many young children would come after Shabbat, but a healthy number attended.

“Shlock Rock and the late risers Megillah went well, and our street entertainer was geared for both children and adults.

“He had a great rapport with kids but tailored things for adults so it was appropriate for all.

“In terms of the weekend there was a real buzz across the age groups.”

“We drew on our different skills sets and the template is one we can replicate,” said Mrs Brown.

“Smaller committees can work effectively; we spread the work out and had incredible volunteers.”

“Each person brought their expertise and passion to the venture,” added Rabbi Kleiman.

Looking ahead, he was confident that this initiative would not be the last.

“I hope it will be the first of many events where we join together and not just for Purim,” Rabbi Kleiman said.

“It would be great to have a full diary of communal events that we do as joint projects.”