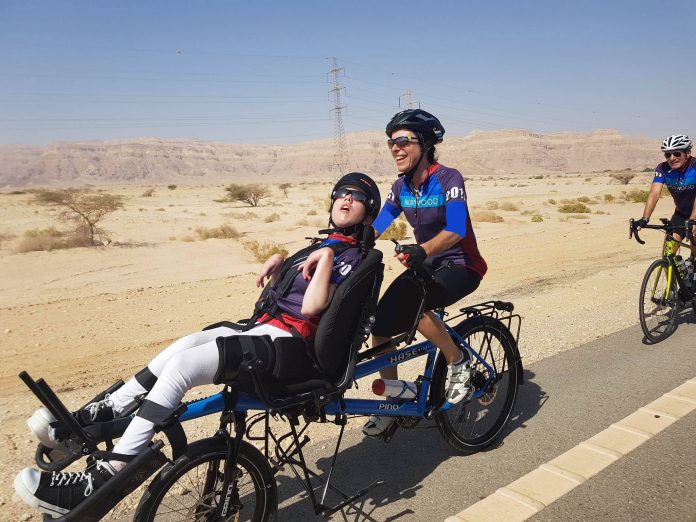 Norwood Challengers took to the roads of Israel over the past week (starting on 15 October) to take part in a spectacular series of three cycles and one trek to celebrate 25 years of Norwood International Challenges.
The Road to Petra, Dead to Red Sea, North to South rides, and The Desert Trek all converged on the coastal resort of Eilat in southern Israel on Friday 19 October for a weekend of celebrations held at the Queen of Sheba Hotel.
Norwood was the first UK charity to introduce international cycling Challenges back in 1992 with a ‘Biblical Bike Ride’ across Israel. 25 years later, Norwood Challenges celebrated their silver anniversary with its 2017 programme of Challenges all held in Israel in a nod to its early beginnings.
One of the challengers, Norwood Director of Fundraising and Marketing Abi Levitt, said: “The logistical challenge of getting more than 200 people, on four separate Challenges around Israel, to converge in Eilat for the celebrations was daunting but inspiring. The amazing family feeling of being part of ‘Team Norwood’ was something I’ll always remember. Riding with the people we support was also a great experience. The whole week was just brilliant. We’re proud to have made it to 25 years of International Challenges; now we can’t wait to kick off the next 25 years in 2018!”
Norwood has always been proud of the inclusivity of its Challenges for people with learning disabilities and mobility challenges. To this end, Norwood introduced tandem bikes in 1993 and this year saw the introduction of the first specially-adapted ‘Pino’ bike. An advanced tandem bike that allows people with limited mobility to sit reclining at the front of the bike whilst the rear rider handles the steering, brakes and gearing.
Mother and daughter team Judith and Stephanie Harris were the first Norwood Challengers to use the Pino bike. Judith completed the North to South ride over 4 days; with Stephanie joining her for 65 kilometres on the last day.
Speaking about their experience, Judith said: “I can only describe it as awesome. We’d only really practiced starting and stopping on the bike; nothing really over any great distance. But having everyone behind ‘Team Stephanie’ felt great. It’s a brilliant feeling to have done it. The celebrations across the weekend were unforgettable. I can only say thank you to everyone for organising this. No one wanted to go home! Personally, I just can’t wait for the next one now.”
Norwood will soon be launching its programme of Challenges for 2018. Brand new Challenges including Fat Biking in Finland and The Sierra Nevada Trek (Spain) see the charity branching out even further to kick off the next 25 years in style!