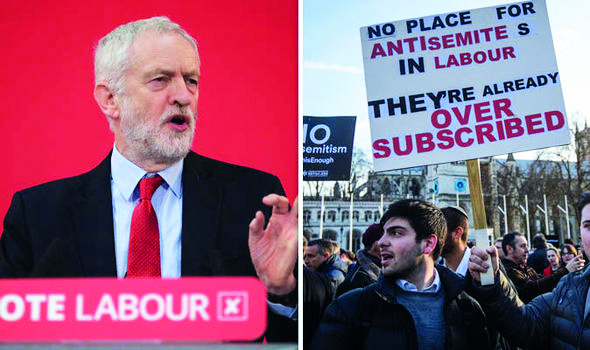 Jewish leaders have been left frustrated following a much-publicised meeting with Jeremy Corbyn to discuss anti-Semitism in the Labour Party on Tuesday.

Jonathan Arkush, President of the Board of Deputies, and Jonathan Goldstein, Chairman of the Jewish Leadership Council met with the under-fire leader for more than two hours only to sum up the discussions as “disappointing” and a “missed opportunity.”

Whilst welcoming Corbyn’s involvement and recent comments recognising and apologising for anti-Semitism in his Party he did not agree to any of six areas of “concrete actions” requested.

Speaking on the BBC, Mr Arkush described the tone as “friendly” and that Corbyn had been engaging and interested but there were no new words in his interview.

“Yet again there were no actions to go with the words and that was why we felt the meeting had been a real missed opportunity and a great disappointment,” he said.

Asked if he would vote Labour, Mr Arkush said he would not and felt his view was shared by almost all members of the Jewish community, many of whom were long standing members.
Mr Goldstein, interviewed on BBC Radio 4’s Today programme, said Corbyn “engages in a conversation until you ask him to do something”.

“When it comes to calling out people that he knows and has known for a long time, he finds it impossible to take that leadership action,” he noted. “Leadership starts from the top and we are asking Mr Corbyn to take behavioural change and leadership seriously.”
Mr Goldstein added: “He could change the atmosphere in a moment and seems to refuse to take those steps.

“The Jewish community wants to move on, and it’s Mr Corbyn’s leadership that can enable us to do this quickly and effectively.

“There is leadership, there is transparency in this process, there is independence in this process that’s needed to give us the comfort as a community that we feel we deserve.”
A joint statement from the two leaders was released following the meeting detailing actions that had not been met.

“They did not agree in the meeting with our proposals that there should be a fixed timetable to deal with anti-Semitism cases; that they should expedite the long-standing cases involving Ken Livingstone and Jackie Walker; that no MP should share a platform with somebody expelled or suspended for anti-Semitism; that they adopt the full International Holocaust Remembrance Alliance (IHRA) definition of anti-Semitism with all its examples and clauses; that there should be transparent oversight of their disciplinary process,” the statement read.

The two lay leaders added: “Words in letters and newspaper articles will never be enough.
“We welcome the fact that Mr Corbyn’s words have changed but it is action by which the Jewish community will judge him and the Labour Party.

“Our sole objective from this meeting was to build trust with Mr Corbyn, but this will not be possible until and unless he and the party turn their many strong words against anti-Semitism into equally strong actions in order to bring about a deep cultural change in his supporters’ attitude to Jews.

“Thousands of British Jews did not demonstrate outside Parliament just for a few lawyers and another newspaper article; they demanded action and so do we.

“We will hold the Labour Party to account for any future failures and continue to represent the interests of British Jews with clarity and resolve.

“We also commit to do our utmost to work with all those within Labour who want to help make it a safe and equal space for all of its members.”

Corbyn described the meeting as “positive and constructive” and the party would settle most outstanding cases of anti-Semitism allegations within the party by the end of July.
“I am absolutely committed to rooting out anti-Semitism from our party and our society,” he said.

“When members of Jewish communities express genuine anxieties, we must recognise them as we would those of any other community.

“I have charged our new general secretary Jennie Formby with improving our disciplinary procedures as her top priority to ensure all complaints are dealt with swiftly and fairly.”
The meeting followed unprecedented criticism of the Labour leader over numerous issues including criticism of his comments on an allegedly anti-Semitic mural in 2012.

Corbyn had also been taken to task for not taking the issue of ant-Semitism seriously.
Gideon Falter, Chairman of Campaign Against Anti-Semitism, commented: “We did not expect Jeremy Corbyn to change his ways after three years, and having set the bar so dismally low he lived up to expectations.

“The Labour Party must now hold Mr Corbyn to account and that is why we have filed a disciplinary complaint against him. We will take legal action if necessary.

“The Jewish community should not dignify the Labour Party with further meetings until Mr Corbyn himself faces fair and transparent party discipline.”