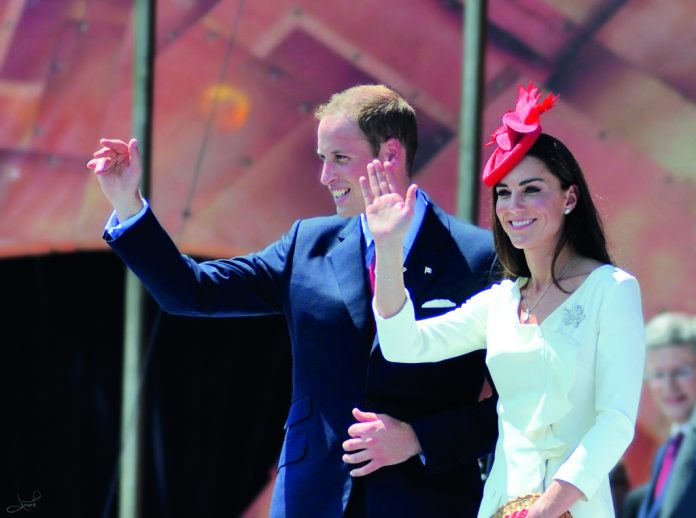 Mazal Tov was the watchword to the Duke and Duchess of Cambridge following the birth of their third child on Monday.
Israel President Reuven Rivlin sent best wishes from the State of Israel whilst Chief Rabbi Ephraim Mirvis led tributes to the happy couple from the Jewish community around the UK.
The new prince was born at 11.01am, weighing 8lb 7oz, Kensington Palace announced in a formal notice posted on the forecourt of Buckingham Palace.
The baby, fifth in line to the throne after Prince Charles, Prince William and siblings Prince George and Princess Charlotte, is the Queen and Duke of Edinburgh’s sixth great-grandchild.
“Mazal Tov! Congratulations to they Royal Highnesses the Duke & Duchess of Cambridge on the birth of their son,” said the Israeli premier.
“Together with Nechama, and all the Israeli people, I send warmest wishes to Her Majesty the Queen and all the Royal Family. Looking forward to welcoming the Duke to Israel soon.”
Chief Rabbi Mirvis said: “Congratulations to the Duke and Duchess of Cambridge and to the entire Royal Family on the birth of a beautiful baby boy! We wish their Royal Highnesses many years of joy from their new son. May he be a source of blessing for our country all the days of his life. Mazal Tov!
Former Chief Rabbi, Lord Sacks, commented: “Elaine and I wish the Duke and Duchess of Cambridge, Prince George, Princess Charlotte and the entire Royal Family a huge Mazal Tov on the birth of a baby boy! We hope you get much nachas from him and may he bring you much joy.”
Israel Ambassador Mark Regev offered “a very hearty Mazal Tov” following the news.
And the Board of Deputies noted: “A hearty Mazal Tov to the Duke and Duchess of Cambridge on the birth of a baby boy!”
Simon Johnson, Chief Executive of the Jewish Leadership Council commented. “It is wonderful and joyous news and the whole community celebrates with Their Royal Highnesses.”
A Kensington Palace statement said Catherine and the new Royal, who is yet to be named, were “both doing well.”

Tony Appleton, a notable town crier, declared in full regalia the newborn prince’s birth outside the hospital. And “It’s a boy” flashed around the top of London’s BT Tower.
Further celebrations included a gun salute at Hyde Park, and ath the Tower of London.
Television crews, journalists and royal fans from around the world had been outside the hospital on ‘royal baby watch’ in anticipation of the birth since early April.