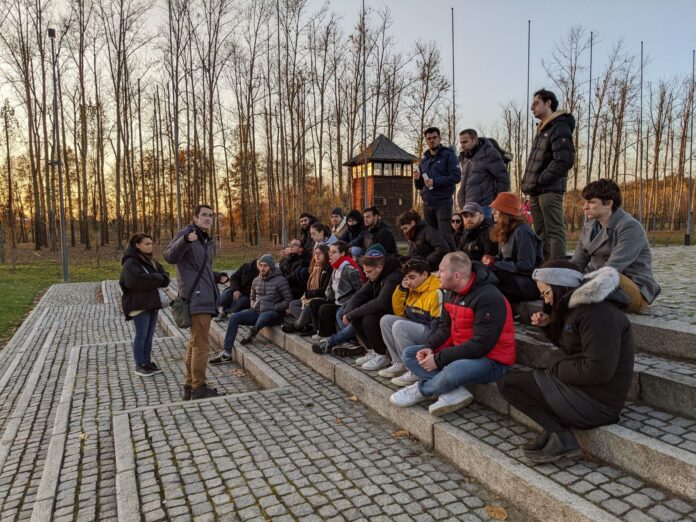 Aish Young Professionals went to Poland for their first trip since 2018, taking a group of 30 participants aged between 20-30. The young professionals were honoured to be joined by famous Holocaust survivor and Nazi hunter, Josef Lewkowicz who is 96 years old. The group was guided by Zac Jeffay from JRoots, an expert in Holocaust education and Jewish journeys to Poland.

The trip began in Lublin, heading straight to the old city overlooked by the castle where they explored the 800 years of unbroken history of the Jews of Lublin prior to the War. From there, the group travelled to Majdanek concentration camp on the outskirts of the city, where they uncovered the horrors of the intricate process involved in the innumerable steps toward the Final Solution. The climax of the visit was when the group sang Shema Yisrael together in the antechamber to the crematoria, followed by the Kaddish prayer next to the mound containing human ash beneath the Soviet era memorial at the camp’s exit.

Spirits were lifted as the group headed back into Lublin to visit the famed Yeshiva of Chachmei Lublin, founded by Rabbi Meir Shapiro and birthplace of the now worldwide Daf Yomi movement. Whilst there, the group studied the topic of ‘Tzelem Elokim’ – a core Jewish belief that humanity was created in God’s image – a belief that is antithetical to Nazi ideology. Thursday evening concluded with singing, dancing and prayer in the magical shtetl of Lizhensk; home of the celebrated Chassidic master and mystic, Rabbi Noam Elimelech.

Friday morning took the group to the old Shul in Lancut, where they learned the incredible story of its survival despite several attempts of Nazi destruction. The Shul has been carefully restored and looked after by a non-Jewish caretaker called Mirek who took it upon himself to learn Hebrew and bring the shul back to life. Friday afternoon dealt with the harrowing reality of the ‘hidden’ Holocaust as the group visited the mass graves outside the city of Tarnow. The victims at these graves ranged from babies to the elderly, and often their identities remain completely unknown.

As Shabbat came in, the group met Josef in his hometown of Krakow. Prior to heading to the ancient Rema Shul for Kabbalat Shabbat, they heard Josef’s post-war story; how he survived the Holocaust’s final days and the years that followed. On Shabbat itself, everyone accompanied Josef on a walking tour to explore the ‘world that was’, seeing the sites of his former home, school and shul. The experience was incredibly inspiring and a privilege to walk in the footsteps of someone as remarkable as Yosef. After Shabbat, they went to the main ghetto square, Schindler’s factory and finally the site of Plaszow Labour camp, where Josef told the stories of his encounters with Oskar Schindler and how he caught and apprehended the ‘Butcher of Plaszow’ before he was brought to justice and hanged in 1946.

The final day was spent in an attempt to fathom the vastness of size and scale of operations at Auschwitz and Birkenau.

Reflecting on the experience, trip participant Sam Bentwood said: “It was very moving to visit the city of Lublin where my family came from, and terribly sad to see so many of my family’s surnames in the lists of those who perished in the Holocaust. On the last day we danced our way out of Auschwitz singing Am Yisrael Chai, something which may have looked a little strange to onlookers, but to us was an act of pride and defiance.”

Rabbi Eli Birnbaum, Director of Young Professionals said: “Going on a journey to Poland is a profound and remarkable journey for each person who does so. Going with Josef, made it a truly extraordinary experience. Josef was able to give a first-hand insight into life in Krakow before, during and after the war, and we are especially grateful to him for joining us, especially considering how increasingly rare it is for a survivor to make the journey to Poland and tell their story.”