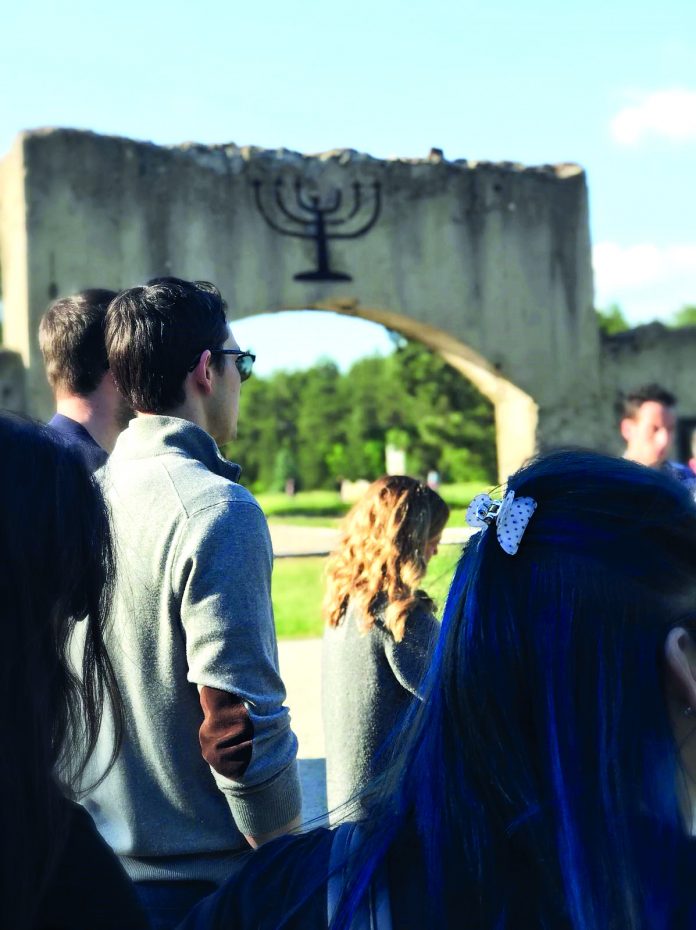 This past Bank Holiday Monday, 15 participants of Aish UK’s young professionals programme travelled to Poland with JRoots guide Rabbi Raphy Garson on an emotional journey of discovery. Landing in Warsaw, the group headed south to the small town of Dąbie – once home to thousands of Jewish residents, where they climbed up a narrow wooden staircase into the dusty attic of a run-down, derelict apartment building. At the far side of the attic and barely visible in the dim light is what remains of the arch that crowned the Aron Kodesh (Holy Ark) of Dąbie’s main Synagogue. In gold and blue lettering, the mural reads ‘this is the house of God, and these are the gates of Heaven’. Seeing the remains of the Holy Ark loom out from the darkness was an incredibly moving and powerful moment. The fact that young, proud Jews had journeyed back to a town that was rendered totally ‘Judenrein’ 70 years ago to bear witness to the atrocities of the Holocaust was more than enough reason to break into an impromptu dance right there in the tiny attic!

The group then confronted the infamous killing fields of Chełmno; the site widely recognised as the ‘birthplace’ of the Nazi’s policy of mass genocide. From here, it was on to the Łódź ghetto and cemetery, where the group heard numerous inspirational stories of the people who had once made Łódź such a vibrant city. From Israel Poznański, an influential philanthropist who single-handedly financed schools, hospitals and synagogues across Poland, to the four young leaders of the Bnei Akiva movement who were on their way to a national conference a year after the war ended when they were tragically ambushed and murdered by an anti-Semitic mob.

Shabbat was spent in the enchanting city of Krakow, with services and meals held in a number of the city’s beautifully preserved historic Synagogues. Kabbalat Shabbat in the majestic Tempel Shul together with hundreds of youngsters from America and Australia was a particularly spirited highlight of the weekend.

On Sunday, the group travelled to the jewel in Hitler’s nightmarish crown; Auschwitz-Birkenau. There, they were privileged to hear from Mr Leslie Kleinman BEM, an incredible and inspirational figure who survived a 600km death march from Birkenau to Sachsenhausen, eating grass and snow to sustain himself. The group shared tears of sadness and joy with Leslie as together they sang the niggun he had sung as a young boy at the table of the Satmar Rebbe. Leslie then blessed the group and thanked them for playing their part in ensuring the continuation of the Jewish people.

Reflecting on the trip, Rabbi Eli Birnbaum commented: “What made this trip unique was the intimate size of our group. It really allowed us the time and space to absorb the scale of the horrors committed in the name of racial purity. But more than this, it allowed us the scope to celebrate what once was, and what we – as young Jews living in relative freedom – can rebuild with pride and joy.”