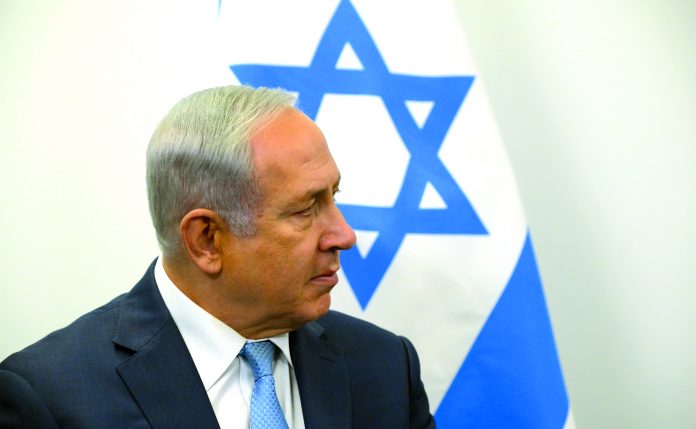 The escalating threat of Iran was top of the agenda as Israeli Prime Minister Benjamin Netanyahu met Theresa May at Downing Street yesterday.

The Israeli leader has made the topic his number one message throughout a whistle-stop tour of discussions with European leaders especially President Donald Trump’s withdrawal from the 2015 nuclear deal.

And Netanyahu had good reason after Iran leader Ayatollah Ali Khamenei labelled Israel a “cancerous tumour” that needed to be removed just prior to the trip.

Khamenei added that Iran would increase its uranium enrichment if the nuclear deal collapsed.

“Our stance against Israel is the same stance we have always taken,” Khamenei tweeted.

“Israel is a malignant cancerous tumor in the West Asian region that has to be removed and eradicated. It is possible and it will happen.”

He added on his official website, “Khamenei, the ruler of Iran, declared his intention to destroy the State of Israel.

“He explained how he would do this, with the unrestricted enrichment of uranium in order to produce an arsenal of nuclear bombs.

“We are not surprised. We will not allow Iran to obtain nuclear weapon.”

The Iran debate has dominated headlines in recent weeks.

Speaking alongside Netanyahu, she said Israel’s security was a top priority for Germany.

Of the nuclear debate, she noted: “We are not in agreement on all questions, but we are friends, we are partners.”

BICOM CEO James Sorene is well aware of the importance of this visit from the Israeli leader.

“Netanyahu will be forgiven for thinking that the arc of history is bending to his will,” he said.

“He arrives in London just weeks after the US pulled out of an Iran nuclear deal he opposed. A week later the US recognised Jerusalem as Israel’s capital, an issue Netanyahu campaigned about for decades.

“Netanyahu will be looking for support from Britain for Israeli action in Syria against Iran, sympathy for Israel’s terrible dilemma on the Gaza border and a willingness to listen to what Israeli intelligence unearthed about Iran’s nuclear secrets.

“Prime Minister May wants to save the nuclear deal in some form and will ask tough questions about recent Palestinian deaths in Gaza.

For both leaders this is an opportunity to consolidate booming trade ties and compare notes on counter-terrorism.”

Only time will tell how influential to the Iran debate the schedule of meetings have been.