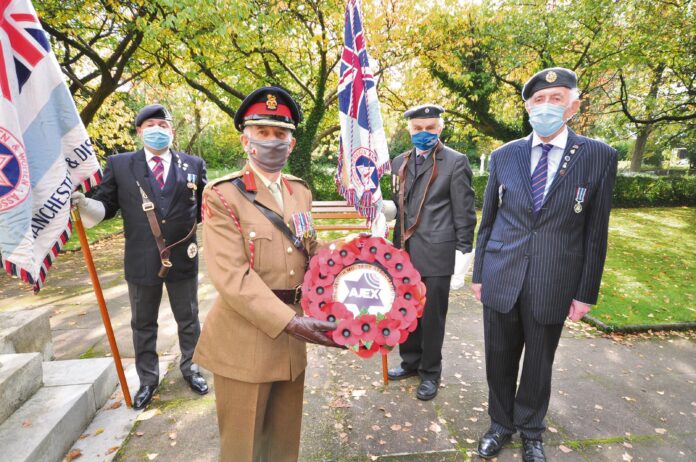 AJEX has boosted its 2020 Campaign of Remembrance because the 86th annual parade this weekend cannot take place at The Cenotaph due to global pandemic.

Last year over 2,000 people attended. Whilst the traditional ceremony is cancelled a poignant online service will take place on Sunday (2.30pm).

TV presenter, newsreader and journalist Natasha Kaplinsky will narrate the virtual ceremony to remember the sacrifice of ex-servicemen and women. It includes senior leaders from the Jewish community and supporting organisations.

Despite challenging circumstances, together with the AJEX team, scores of members and volunteers have worked tirelessly to plan an online event which includes contributions from a wide range of community figures, of all ages that will do justice to a key event that has been held since the 1930’s.

“We are determined to communicate the importance of Remembrance and the strength that it can give in such a time of crisis,” said AJEX Chief Executive, Fiona Palmer, who thanked Ms Kaplinsky for donating her time to narrate the ceremony.

She noted, “The continuation of this annual ceremony is essential to remind both Jews and non-Jews, of the vital role played by our community in British life and to honour the immense contribution of Jewish ex-Service men and women.

“AJEX was formed to ensure the Jewish sacrifice for our country is honoured and remembered.

“Many people across our community had family who fought in HM Armed forces, especially during the two World Wars and this is an opportunity for us all to honour their memory.”

The change in format of the parade has allowed AJEX to raise awareness about its 2020 remembrance campaign in build-up to the ceremony.

Educating remembrance from a young age ensures the legacy is passed on. With this in mind, AJEX has involved primary, secondary school children and nurseries. Aside from a poppy drawing competition that ends on Monday, children will wear an item of red as a remembrance initiative tomorrow. Secondary school pupils have also spoken to veterans via zoom.

In addition, AJEX are inviting people to say a special prayer of Remembrance at home this Shabbat.

AJEX National Chairman, Mike Bluestone said, “It is our sacred duty to ensure that we always remember and commemorate our Jewish brothers and sisters who gave their all, not only in two World Wars, but also in subsequent and contemporary conflicts in the service of HM Armed Forces.”

He added, “As Jews all over the world show resilience in such challenging times, AJEX too, approaches the pandemic with the same vigour and attitude. We would not allow this to affect us from honouring our fallen heroes.”

Rabbi (Major) Reuben Livingstone CF LLM, Senior Jewish Chaplain to HM Armed Forces and Chaplain to AJEX added, “In light of what is continuing to unfold around the world, it is more important than ever to ensure we can all come together. The first AJEX parade took place to combat anti-Semitism, we can draw strength from the resilience of past generations to remember the courage and sacrifice of all who served.”