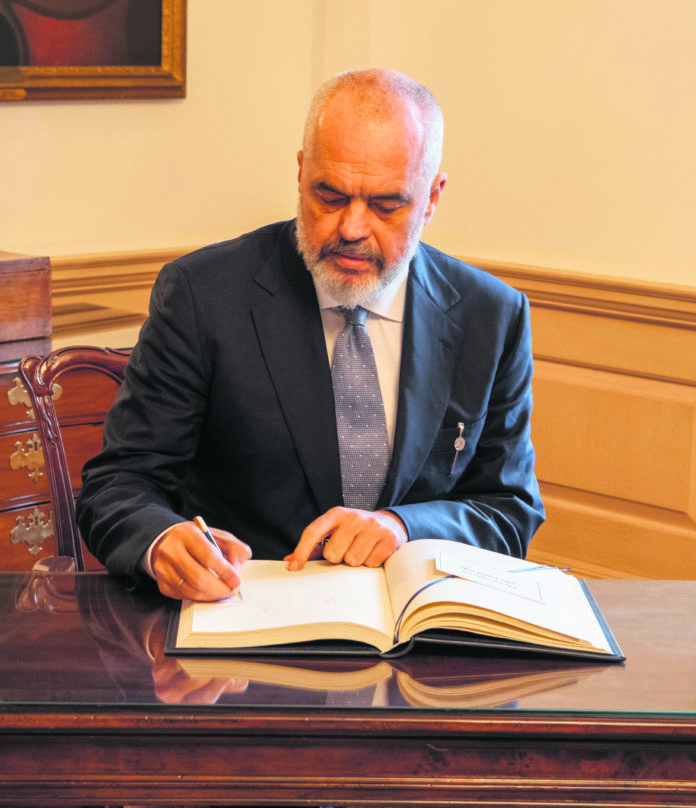 US Secretary of State Mike Pompeo, European Parliament President David Sassoli and Yariv Levin, Speaker of the Knesset were amongst keynote speakers at the online landmark event.

The Albanian Parliament in partnership with the Combat Anti-Semitism Movement and Jewish Agency for Israel organised the event, which followed Albania adopting the IHRA working definition of anti-Semitism last week.

Campaign Against Antisemitism welcomed the move.

Albania is the first Muslim-majority to adopt the global definition.

“It is good news that we, the Albanians and the peoples of the Western Balkans, a region that has suffered more than any other part of the world, the consequences of ethno-centrist and religious-centrist views and attitudes, join this emancipatory action of contemporary civilisation, the fight against antisemitism,” Gramoz Ruci, Albania Parliament speaker reportedly said.

“All nations that throughout history have protected Jews from extermination and support them today against stigma have a right to be proud,” he added. “But we Albanians have more reasons to be proud, because Albania is the only country in Europe where all Jews were taken under protection and rescued during World War II. Our homeland, Albania, in difficult times has served as a substitute soil for Jews.”

In other CAA news, Hastings Borough Council has adopted the IHRA definition. Cllr Dany Louise, who sits as an Independent, proposed and promoted the motion.

Aside from Cllr Leah Levane, who abstained, all councillors on the virtual Council meeting adopted the definition. Cllr Levane is a co-chair of Jewish Voice for Labour.

Cllr Louise reportedly said, “In the last few years, anti-Semitism has entered the national public discourse in a truly frightening and morally repugnant way. Where once it was the preserve of the far right, it has now become commonplace on the left as well. Shockingly, there has been widespread denial of this fact, with far too many people somehow casting it as yet another Jewish conspiracy theory. The denial itself has become another form of anti-Semitism, enthusiastically entertained by many who would otherwise call themselves part of the Community of the Good.”

Noting she had been “driven out” of the Party because Labour had become a “welcoming environment for anti-Semites”, Cllr Louise recalled dismissive reactions from previous colleagues, including “Jews should complain quietly” and references to “the Jewish question”, when she raised anti-Semitism issues.

“We are particularly grateful to Cllr Louise for bringing and promoting the motion to adopt the definition so passionately,” noted a CAA spokesman.

CAA welcomed the Council’s decision to adopting the definition.

“It is something for which we and others have long campaigned ever since we secured the adoption of the definition by the British Government in 2016,” a spokesman said.

CAA are backing Jewish students at Lancaster University vowing to fight until the establishment adopts the international definition.

Currently the adoption is “under review” according to a reported university statement.

The university reportedly noted, “Our University is committed to building a diverse, inclusive environment where people are able to reach their potential free from prejudice. Anti-Semitism, racism or hate speech of any form will not be tolerated.”

They added, “With the appointment of a new Vice Chancellor in May 2020, the university’s policies to support equality and diversity are under review as part of a wider strategy update. A more formal consideration of the International Definition of Antisemitism may take place as part of this.

“At this stage, no specific timetable relating to any consideration to adopt the definition has been set, however the matter will be discussed by University management in due course.”

The University’ Jewish Society has protested and accused the university of being anti-Semitic by not adopting the definition.

JSoc’s Campaigns Officer reportedly added, “It is shameful that people in 2020 can’t accept a definition that protects against hate. We love Lancaster, it’s an amazing place, we are heavily involved in campus life and the community. The work we are trying to do is relating to us improving the prospects of Lancaster students because the university can do better and we want them to do better.”

Elsewhere, a former Mayor of Luton has been suspended by the party over alleged anti-Semitism.

Tahir Khan, who served as Mayor in 2016-17, is Labour’s candidate for Bedfordshire Police and Crime Commissioner and will not represent Labour in the 2021 elections.

A Labour spokesman reportedly said, “The Labour Party takes all complaints of anti-Semitism extremely seriously and they are fully investigated in line with our rules and procedures, and any appropriate disciplinary action is taken.”

A CAA spokesperson said, “We are pleased that this case is being investigated by Labour, but the Party must make its processes transparent so that the Jewish community and the public can see whether and what action has been taken. The Party’s failed disciplinary processes are why we referred Labour to the EHRC in the first place, and it must now urgently introduce an independent disciplinary process in order to restore confidence in the Party’s procedures.”