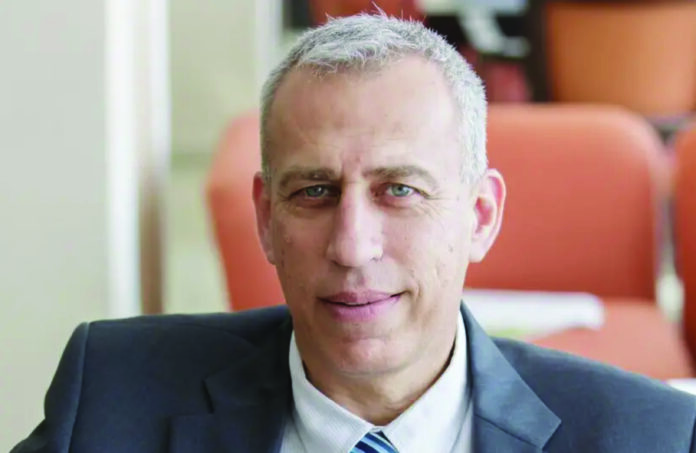 Ash’s appointment comes as Covid-19 cases have fallen to the lowest rate since June as a result of the recent lockdown when schools and most businesses closed.

Latest Health Ministry figures report 844 cases, 453 patients in serious condition in hospital with 196 on ventilators. To date, there has been 2,483 fatalities.

Ultra-orthodox communities have been among the hardest hit throughout the pandemic but in a ray of hope on Tuesday news came that the status of Bnei Brak had moved to “green”. Back in April at the onset of the deadly virus, just under 40% of its 75,000 residents were reported to be infected.

“This morning we mark another significant milestone in our fight against the coronavirus,” Bnei Brak Mayor Avraham Rubinstein reportedly said. “The residents of Bnei Brak are already learning battle strategies against the virus. With the help of heaven, we have worked together with them in order to defeat the second wave.”

Gamzu took up the position in August knowing he had to return as head of Tel Aviv’s Ichilov Medical Center on November 13. A transition period will take place.

Ash, a former head of the IDF medical corps, graduated at Tel Aviv University and completed a Master’s degree in Medical Informatics at Harvard University. A professor at Ariel University, he has served the Health Ministry and is currently Maccabi Healthcare Services deputy CEO.

A number of local and regional governments announced they would open schools for grades 1-4 on a five-day week but don’t have the budget and teachers’ unions are against the move.

Netanyahu has announced there is no funding for extra schooling due to the NIS 6 billion cost.

“We are talking about the resumption of ‘one-on-one’ treatments, including barbers, beauticians and alternative medicine,” he reportedly noted. “We are very sensitive about the situation of small businesses in the country, and it is impossible to really ignore the great difficulty they are facing.”

Gamzu added, “We want to be careful because I do not want to bring Israel back to where it was at the end of the first wave.”

“The Ministry of Health has made it clear that opening retail trade in parallel to the education system in grades one through four could lead to too heavy a price in morbidity,” Kish told Kan Radio.

Netanyahu has consistently stated Israel will take a measured approach and in an address this week, noted the level of morbidity was lower than most European countries.

“Unfortunately, the second wave is raging there and hitting them like it is also hitting us,” he reportedly explained. “I hope that these countries will succeed in lowering morbidity like we have. (But) we will be here only if we adhere to the rules.”

He added, “If morbidity comes down, the restrictions will come down. If morbidity goes up, the restrictions will come back. We have no choice. This is the only way to ensure life. I know that it is difficult. I know that there are difficulties for the self-employed. There are difficulties for businesses. “We must do this but not at the expense of life. We will do what is necessary.”

Netanyahu concluded, “What is necessary at the moment is simply the ability to put politics aside and put the State of Israel first. To all of my political rivals, I say, we will have enough time for politics. Now it is necessary to concentrate on one thing only, mutual guarantee, responsibility because together we will defeat this pandemic.”

In related news, the Health Ministry has called on all teaching staff to be tested for COVID-19 as part of ‘Operation Education Shield’.

“Planning and coordination work has taken place to improve the ‘return to routine’ outline led by the Ministry, Education Ministry and local government centre to ensure (the) safe return of children and staff to school,” a spokesman said in a statement.

Gamzu warned on Monday restrictions could not be eased unless 50,000 tests are carried out daily.

“I urge every citizen to get tested even on the slightest suspicion that you were infected,” he reportedly said. “The tests are accessible and the results are ready within hours.”

He added, “Children are often asymptomatic and that leads to the next stage of symptomatic cases in adults followed by hospitalisations.”

Gamzu confirmed the Health Ministry was capable of carrying out 70,000 daily tests increasing to 100,000 tests.

Of all industries severely hit by the pandemic, tourism ranks among the highest.

In a demonstration of progress, Israel’s cabinet has designated Eilat and the Dead Sea region ‘green’ tourism areas. Visitors must present an up-to-date negative Covid-19 test.

Under an Israeli Tourism Ministry proposal, guided by Health Ministry and Public Security, hotels would reopen along with businesses supplying services for guests.

“The outline gives an immediate response to 30 percent of the tourism industry, in special geographical areas of Israel, Eilat and the Dead Sea,” Tourism Minister Orit Farkash-Hacohen reportedly confirmed. Government approval is at the “first stage”.

“There needs to be more legislation in the Knesset and the development of a complex mechanism that can be put into practice,” noted Farkash-Hacohen.

“There is no doubt in my mind that this process is not a replacement for the need to open and rehabilitate the entire tourism industry, and the immediate opening of rural tourism in Israel,” she added.

Whilst news has been more upbeat, medical experts have warned that around 20% of Israelis may suffer from emotional and psychological distress as a result of the pandemic.

“You cannot meet with friends, go to the movies, see a play or conduct a normal life routine,” he reportedly said. “Normalcy is a calming thing and once it is gone, you cannot properly cope with stress and pressure.”

Psychiatric experts had estimated a million Israelis would need help, but that figure has risen dramatically to over 1.5 million.