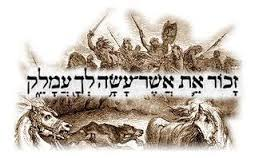 This week is Parshat Zachor- the second of the “Arbah Parshiot.” We read a short but powerful piece from the  Book of Devarim exhorting us to “Remember that which Amalek did unto us.” Amalek is the perennial foe of Am Yisrael. He surfaces in the Megillah in the guise of the wicked Haman. Many of the Nazis were clearly descended from Amalek. Such intense hatred of anyone with Jewish blood – irrespective of whether they were Halachically Jewish or practising Jews – is indeed the very hallmark of Amalek.

Amalek’s hatred of the Jews is irrational. It defies any logical explanation or rationale. It is ingrained in his DNA. People often try to explain anti-Semitism. They try to identify “triggers” which might cause someone to hate Jews. There are wonderful organisations such as the Holocaust Memorial Day Trust, which tries to educate the wider world in the horrors of the Holocaust and ensure that by educating people – particularly the younger generation – it will help to ensure that there will never be another Holocaust.

Many Holocaust survivors – such as my dear friend Chaim Ferster – who sadly passed away last month – dedicated themselves to sharing the horrors of their experiences with as many people as possible. (Chaim z”l spoke to over 1000 people the week before he passed away!) All this is extremely important. However, there are some people for whom education and preaching tolerance will never have the desired effect. These are usually the descendants of Amalek! We can only pray to G-d that they will never be able to bring their plans to fruition. As we say in the Haggadah Shel Pesach, “In every generation they rise up against us. Hakadosh Baruch Hu delivers us from their hands.”

There is no known antidote to Amalek’s hatred. It can only be Nullified, not eradicated. Only when Mashiach will arrive will we finally be rid of our most bitter foe.