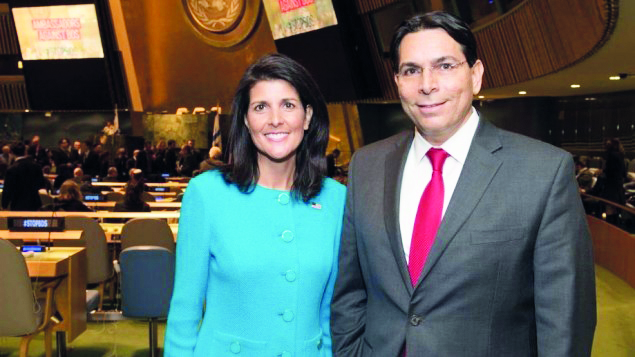 Nikki Haley, one of the most outspoken pro-Israel champions of the Donald Trump administration is in Israel this week touring the country from the Gaza periphery to the northern border.

Ms Haley was expected to arrive at Ben Gurion Airport on Wednesday morning for her first visit to the Jewish state since taking office in January. During her three-day stay, she is set to meet with Prime Minister Benyamin Netanyahu and President Reuven Rivlin as well as with senior Palestinian dignitaries.

She will also visit the Old City of Jerusalem, including the Western Wall, pay an official visit to Yad Vashem Holocaust memorial museum and see Tel Aviv. In addition the Ambassador will take several helicopter rides to Israel’s border with the Gaza Strip and its northern border.

“We’re happy to host in our country a true friend of Israel,” Israel’s UN ambassador, Danny Danon, said in a statement. “Haley has been standing with Israel for many years now, and especially since she arrived at the UN. Her important visit is an opportunity to present to her our country and the joint challenges that stand before us.”

According to a press release, Danon will accompany Haley throughout the visit, but her expected visit to various sites in the Old City of Jerusalem is billed as private, which means that no Israeli officials will accompany her.

Last month, US President Donald Trump visited the Western Wall and the Church of the Holy Sepulchre, both located in the “disputed” Old City. Trump became the first US President to make such a visit while in office but in a private capacity, without official Israeli accompaniment.

Israel captured the Old City and other parts of East Jerusalem during the 1967 Six Day War and subsequently annexed them. The entire international community, including the US, has never recognized Israel’s claim to that part of the city.

Many foreign visitors to Israel who want to visit the Old City do so in a private capacity so they don’t appear to be tacitly recognizing Israeli sovereignty in the contested area.
In the lead-up to Trump’s Israel visit, some senior US officials refused to say whether they consider the Western Wall part of Israel. Haley was the only senior member of the administration who took a clear stand on the matter.