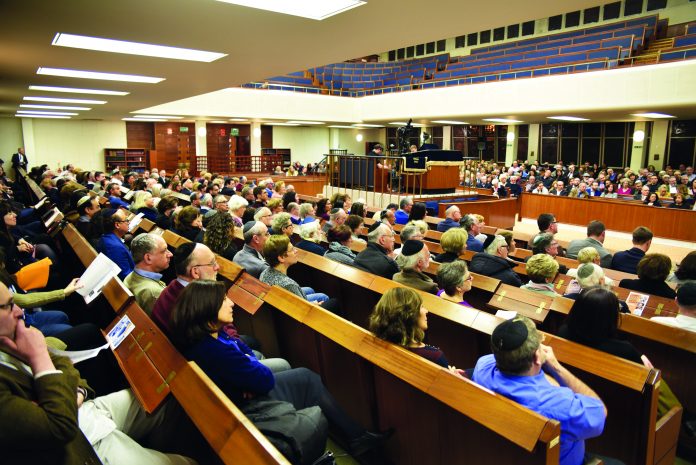 Over 500 people came to St John’s Wood Synagogue for a Yom Hashoah Commemoration on Thursday 12th April. It was hosted by St John’s Wood Synagogue, British friends of Laniado & The Simon Wiesenthal Centre. The evening began in the main Synagogue Hall, where guests enjoyed a buffet supper. The service and lecture was introduced by inspiring words from Rabbi Yoni Golker, who then recited a memorial prayer for victims of the Shoah.
The crowd then heard a short address from Dr Shimon Samuels, Director for International Relations of the Simon Wiesenthal Center, who briefly and powerfully elaborated on the wonderful work the Wiesenthal Centre does.
Dr Alan Mendoza, founder and the Executive Director of the Henry Jackson Society chaired the rest of the evening superbly and introduced the guest speaker, Melanie Phillips and the Q&A.
Melanie Phillips is a British journalist, author, and public commentator. She gave a fascinating, thought provoking talk on the future of Jews in Europe and the UK and the recent surge in antisemitism. Her talk was powerful and at times worrying as she reviewed the rise in hate towards the Jewish community and the challenges Anglo-Jewry faces in recent times.
Melanie contemplated how “the antisemitism in Labour’s ranks is an existential crisis not just for the party but for the Left as a whole.”
The crowd gave her a standing ovation and the event was thoroughly enjoyed by all those who attended.