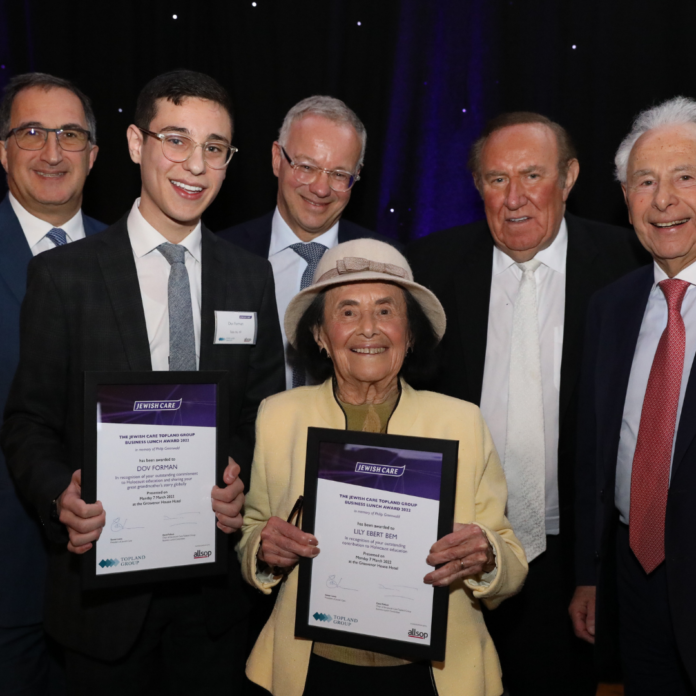 Jewish Care hosts 34th Topland Group Business Lunch featuring renowned publisher and broadcaster, Andrew Neil. This year’s award winners are Lily Ebert BEM and Dov Forman.
More than 900 people gathered at Grosvenor House yesterday for Jewish Care’s Topland Group Business Lunch, which raised over £400,000 to support our vital services.
The lunch, in its 13th year of partnership with the Topland Group, featured guest speaker, renowned presenter and broadcaster, Andrew Neil. Andrew gave a very frank account of the current state of affairs in the world today and the fight for democratic freedoms throughout history. Speaking of Ukraine, Andrew said, “When Ukraine emerges from this long, dark time, it will emerge with its pride and respect higher than ever, and nations of Europe with no doubt that Ukraine is a European democracy that intends to be at the heart of Europe and part of the European family […] And when that happens, you’ll know that democracy has not been defeated in the 21st century, in fact, it is back with a spring in its step.”

The award this year, given in memory of Philip Greenwold, who was one of the Topland Group Lunch Committee’s original members, was awarded to Holocaust survivor, Lily Ebert BEM and her great grandson, Dov Forman.

Lily Ebert was one of the founding members of Jewish Care’s Holocaust Survivors’ Centre, the only place of its kind in the country which supports Holocaust survivors through a specific programme of social, cultural and specialist therapeutic activities. Lily has dedicated her life to Holocaust education, speaking publicly in schools and universities around the world.

After fortunately recovering from Covid-19 in 2020 at 97 years old, her great grandson, Dov, came up with the idea of turning to social media, in particular, Tik Tok, to help Lily continue to share her story when the world was in lockdown and Lily was no longer able to educate others in person.

In one of the first Tik Tok videos Dov shared, Lily said, “I want to tell you about my story, because in a few years’ time I won’t be able to. It will become history.”
Lily and Dov now have over 1.9 million followers on Tik Tok, and their book, Lily’s Promise is a Sunday Times Best-Seller and Waterstones and Daily Mail UK’s best history book of 2021.

Lily also appeared in the powerful documentary, “Portraits of the Holocaust”, in which she was one of the seven survivors featured in specially commissioned paintings by Prince Charles which are now on display in the Queen’s Gallery at Buckingham Palace.

All guests were given a copy of Lily and Dov’s book, Lily’s Promise, which was kindly donated by Dentons.

Accepting the award on behalf of he and Lily, Dov Forman, said: “It is now more important than ever that we listen to incredible survivors like my great grandmother. We must remember their stories and we must take the time to remember those who are no longer able to speak for themselves.

Lily knew that if she survived Auschwitz, she would tell the world about what happened to her and her family. She knew that one day in her future, she would be called on to become a witness, and I know that one day in my future, I will carry on her legacy. I will be her witness to the next generation. And today, if you listen to my great grandmother, and read her story in our book, “Lily’s Promise”, we are inviting you to become her witnesses too.
I would like to thank Jewish Care for this award, and I feel incredibly privileged to share a stage and this award with my incredible great grandmother.”

Daniel Carmel- Brown, Chief Executive, Jewish Care, said:
“We are absolutely thrilled to be back with our generous supporters at the largest Topland Group Business Lunch to date, and certainly the largest in-person event we have held since the pandemic, with over 900 people in the room. We are incredibly grateful to all of our guests who have helped to raise an extraordinary amount of money for our core services. Jewish Care was honoured to give this year’s award to Lily Ebert and Dov Forman who have dedicated so much to Holocaust education, something that is so important not just to our community, but to the world. We also, of course, extend huge thanks to Andrew Neil for such an interesting keynote address.”
David Pollock, Chairman of the Topland Group Business Committee, said:
“After an extremely challenging two years, it is great to be back at this event in person. We are so glad to see the room filled with 900 guests and we owe a huge thanks to so many for helping to bring today together and provide great support for Jewish Care’s vital services.”
Sol Zakay, Executive Chairman and CEO of the Topland Group, said:
“We are so pleased to see a record number of people here again this year supporting Jewish Care. It is also so important that we see Dov and Lily honoured for their work and dedication to Holocaust education through both traditional and new, innovative avenues. The Topland Group lunch provides a truly unique opportunity for this mix to happen, and we are delighted to continue to work with Jewish Care on such a meaningful event. It is a real source of pride to the Topland Group to be able to support this lunch and help to raise so much for Jewish Care.”