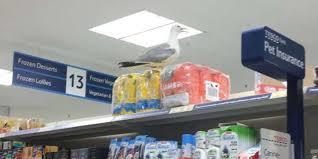 An enraged avian forced the total evacuation of a supermarket in Cornwall on Tuesday evening as shoppers looked on in dismay. The angry seagull swooped into the Tesco store in Garras Wharf, Truro at around 8:30pm and began
harassing customers and staff. Customers were reportedly hit in the face by the seagull as it entered the shop. The store was ultimately forced to close for 75 minutes as staff attempted to apprehend the angry bird, leaving more than 50 people unable to purchase their groceries. The seagull was eventually captured and safely released outside after taunting workers from over a pack of IAMS cat food.