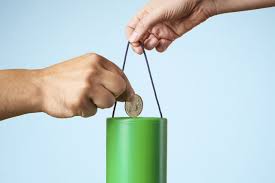 Ari had just settled down on the couch with a new book and a cold drink. Ah, this was the life. Soon he was engrossed in the thriller and was just up to a very dramatic moment, when Ding, dong. Ari sighed. Bother. Bother, bother, bother. Couldn’t they have come two pages later? Reluctantly he tore himself away from his book and went to get the door. “Tzedakah?” “Sorry, my parents are out.” And without waiting for a response, he slammed the door. Ari hated answering the door to tzedakah collectors. Why did they have to come and bother him all the time? And so many of them as well. Bother. Now where was he up to? Ah yes, the undercover CIA agents were meeting the Russian terrorist. Ari had just gotten back into the story and a Mossad agent had just been discovered when Ding, dong. Not again. After shooing this one away, Ari decided he deserved some pretzels and munched tensely as he followed the Mossad agent’s attempted escape. So far there were five intelligence agencies, Russian terrorists, a Nazi
– and this was only chapter five! The chapter ended on a cliff-hanger and Ari hurriedly turned the page when Ding, dong. Arggh! Why couldn’t all these stupid collectors leave him alone? He yanked open the door. “What?!” “Tzedakah!” grinned a tall man with kind blue eyes, white hair and a white beard. “Sorry, my parents are out – “ “I know, your father said so, but he told me you would be in. I’m staying here tonight.” Ari vaguely recalled his father telling him something. “What’s your name?” “Rabbi Shalom Cohen, and I’m collecting for poor children in Israel.” “Oh yeah. Um, sorry. Er, come in.” Ari led the Rabbi into the house rather sheepishly and offered him a drink. “Thank you! There’s nothing like a cold drink and good book,” said the Rabbi pointing at Ari’s book, lying teasingly on the couch. “Yeah.” Ari glanced longingly at the book. He was just itching to get back to it but instead he was stuck entertaining his father’s friend. Great, just great. “It’s good to sit down, my feet are aching.”
“How come?” Ari blurted. “I’ve been collecting all day. It’s not easy trekking all over the place, especially not at my age!” The Rabbi winked those twinkling eyes of his (seriously, he actually had twinkling eyes! Oh come on, though Ari) at Ari and gave him a big smile. “Not every house has a nice boy at the door who invites me in to rest and have something to eat or drink.” Something occurred to Ari. “Is it hard to collect?” He’d once sold raffle tickets for school with a friend, and even that was tiring. He’d never thought about it before, but collecting all day was probably much harder. “Well, it’s hard work. It can also be very embarrassing. Not everyone is welcoming, and some are, shall we say, not exactly pleased to see us.” “Then why do you do it?!” The Rabbi sighed. “Not everyone is as lucky as you, Ari. Some children don’t even have blankets to keep them warm during the winter nights. Some families can’t even afford bread for sandwiches, never mind anything to put in them. Some people become ill and suddenly find themselves straddled with debt on top of everything else. For others, a wedding is a source of fear – they simply can’t afford to make one. And there’s more…” “Oh. I guess so many people come collecting because there are so many people who need things?” “That’s right.” “Oh.” Ari thought hard, his book long forgotten…. Ding, dong! Ari took a pound from his savings and ran to the door. “Hello,” he smiled, “how can I help?”