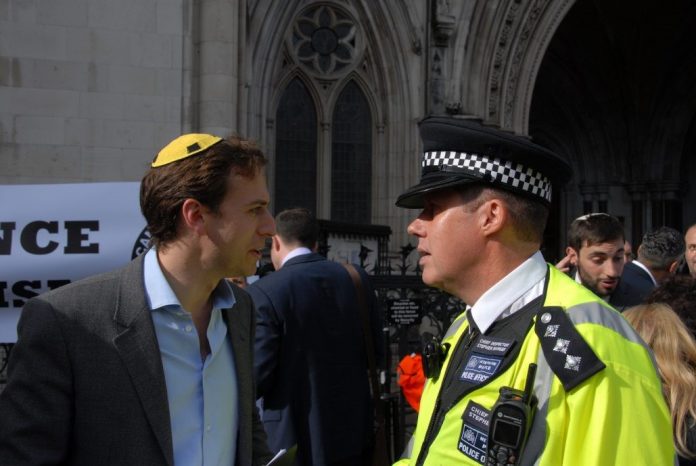 Last Sunday the Campaign Against Anti-Semitism released details of an investigation it had undertaken into the level and intensity of anti-Semitic hate crime in the UK in 2016. This audit was grounded in figures obtained from all UK police forces. The data makes for grim reading:

• In 2016 anti-Semitic crime in the UK rose to its highest-ever recorded level, rising by 15 percentage points compared with 2015 and by 44 per cent compared with 2014.
• In 2016 the actual number of recorded anti-Semitic crimes was 1,076.
• One in ten of these crimes was violent. But only one violent anti-Semitic crime resulted in a prosecution.
• Small Jewish communities – outside Manchester and London – figured disproportionately as the locations of these incidents, as was the case in earlier years.
• In 2016 almost half of the police forces in the UK failed to charge anyone in respect of any anti-Semitic hate crime reported to them. Indeed the number of anti-Semitic crimes charged decreased by almost a third compared to 2015, and by over a third compared to 2014.
• In 2016 only 1.4 per cent of all anti-Semitic hate crimes reported in the UK resulted in a prosecution – just fifteen cases. Only one of these was a violent crime. In 2015 twelve anti-Semitic crimes were prosecuted, only 3 of which involved violence.
As the CAA’s National Anti-Semitic Crime Audit (from which these highlights are taken) makes clear, the 2016 data reveal a shocking state of affairs, reflecting an abject failure by our law enforcement agencies to carry out their legal obligations. The Audit makes some recommendations as to how this state of affairs might be improved in future years. But before I consider these, I want to draw attention to what the Audit does not tell us – namely why anti-Semitic crime is on the increase and what is its major origin.
To answer these questions we can do no better than to turn to a very recent report – Anti-Semitic Violence in Europe – authored by a leading Norwegian expert in this field, Dr Johannes Due Enstad, who is a Research Fellow at the University of Oslo’s Centre for Research on Extremism.
Dr Enstad investigated incidents of anti-Semitic violence in seven European countries (Russia, Sweden, Denmark, Norway, Germany, France and the UK) between 2005 and 2015. Here are some of his findings:

• During the decade 2005-15 Russia had the lowest level of recorded violence against Jews.
• Top of the list was France, where, during this period, there were over 4,000 violent anti-Semitic incidents, described as “physical violence against individuals and serious attacks on buildings that potentially threatened human life.” These incidents do not include vandalism or verbal harassment.
• The UK came second to France, with almost 3,900 violent incidents.
• The situation facing the miniscule Jewish communities of the Nordic countries was dire – above all in Sweden. Dr Enstad points out that “Measured in number of reported incidents per 1,000 Jews — a measure indicating exposure, or Jews’ chances of being subjected to antisemitic violence — Sweden comes out on top with a score four times higher than France, with Germany and the UK in the middle.”
Who do you suppose carried out these attacks?
Only in Russia were the perpetrators predominantly thugs of the skinhead and neo-Nazi varieties. In analysing the data provided by both law enforcement and communal agencies in Sweden, France, Germany and the UK, Dr Enstad concluded that “right-wing extremists, who are often associated with anti-semitism, in fact constitute a clear minority of perpetrators. Respondents in all four countries most often perceived the perpetrator(s) to be ‘someone with a Muslim extremist view’.” And he added this observation: “It is also worth noting that in France, Sweden and the UK (but not in Germany), the perpetrator was perceived to be left-wing more often than right-wing.”
Have you got that? Except in Russia, Muslim extremists were the major perpetrators of violence against Jews, and in general – again excluding Russia – the miscreants were perceived as left-wing rather than right-wing. To quote Dr Enstad again: “Available data on perpetrators suggest that individuals of Muslim background stand out among perpetrators of anti-Semitic violence in Western Europe … Attitude surveys corroborate this picture in so far as anti-Semitic attitudes are far more widespread among Muslims than among the general population in Western Europe.”
Now I am aware that these conclusions will sit unhappily with received wisdom, especially in this green and pleasant land, and that the purveyors of this wisdom are likely to feel very uncomfortable as they read and digest the Enstad report. But until we all recognise that, in this green and pleasant land, it is Islam (admittedly of a certain variety) that is fuelling violence against us, we shall never begin to grapple with it.
The CAA Audit makes some very useful suggestions as to the ways in which training and guidance can assist in raising awareness of anti-Semitic hate crime among our police forces and the Crown Prosecution Service. But this training will be of limited benefit unless it also encompasses awareness of the root causes of the problem.