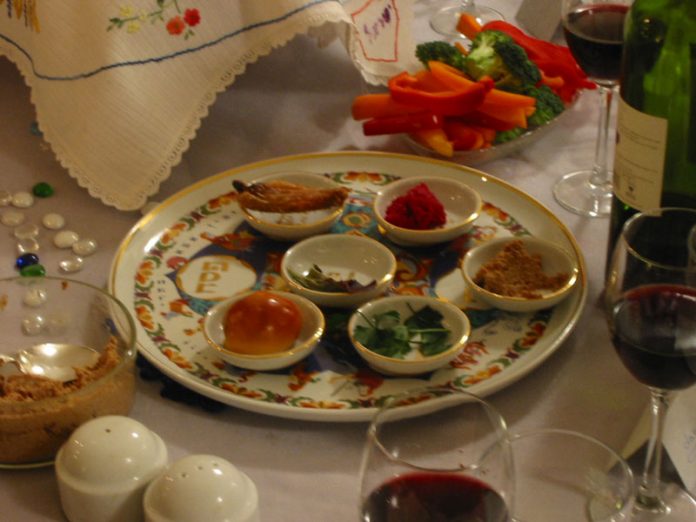 WHAT IS THE QUESTION?

Abraham Joshua Heschel said that our generation knows the answers but has forgotten the questions.

With regard to Pesach we know that our ancestors were slaves in Egypt, God redeemed them and took them out across the Red Sea to become a free nation, and we celebrate these events by observing Seder night and reading the Haggadah.

That’s the answer, but what is the question?

The question seems to be “Mah Nishtanah”. But there are at least two problems with this phrase.

If it’s a question, the four statements that follow are answers and not questions. In other words, “What is different…? The fact that we eat matzah, etc.” That means that there aren’t four questions but only one.

On the other hand, if “mah” is an exclamation, the four statements in Mah Nishtanah are illustrative explanations, and therefore there are no questions at all and nobody is asking anything.

What do we mean by “nishtanah”?

Most translators render it in the present tense, “Why is this night different?” or “How different this night is!”

But “nishtanah” is actually not present but past tense from the root “shin-nun-heh”, to change or differ. The translation therefore ought to be, “In what way did this night become different?” or “How different this night became!”

In that case the topic of discussion is not what we thought it was, the Seder procedure.

What we are called upon to do is not to talk about the content of the Seder but the history of the Haggadah.

THE SERIOUS SIDE OF CHAD GADYA

Don’t be taken in by “Chad Gadya”.

The song begins with a kid which was bought for two zuzim. The kid was eaten by the cat; the cat was eaten by the dog; the dog was beaten by the stick; the stick was burnt by the fire… and so on until in the end God Almighty appears and brings the chain effect to an end by destroying the Angel of Death and asserting His sovereign power.

The first Haggadah to include it seems to have been as recent as 1590, though the idea goes back to the Mishnah (Avot 2:7), where Hillel sees a skull floating on the water and says, “Because you drowned others, you yourself have been drowned – and they who drowned you will finally be drowned themselves.”

The Vilna Ga’on applied the song to Jewish history, identifying each of the characters with a person or age in Jewish history until in the end nothing remains but God. Emil Fackenheim pointed out that history – as poetically described in “Adon Olam” – began with God’s sole Presence and will end with God once more reigning alone.

What Chad Gadya has to do with Pesach is questionable, though some see in it a hint of the paschal lamb.

There are those who simply say that it is a nursery rhyme, written to keep the children awake and alert but adopted by adults to end the long Seder procedure with a triumphant crescendo.

The truth probably is that the poet who composed the song was no comedian but a subtle philosopher. We don’t know his name. His theme was Cause and Effect. His maxim was that nothing just happens randomly.

There may even be a hint of Darwinian Survival of the Fittest – with a devastating commencement and a decisive conclusion that totally contrast with Darwin.

Chad Gadya starts with the purchase of a little goat. By implication the song asks where everything began. Its answer: “Father”, i.e. God. Nothing occurred or erupted by mere chance. There was an act of Creation. God brought the world and its inhabitants into being. He gave man free will.

He said, “Man, I have given you a world. I have endowed you with the energy and ability to make something of the world and yourself. What now happens is up to you. If you are wise, you will follow my recipe of moral principle. If not, you will be responsible for your results. I will not dictate to you or force you. I will not intervene. But I will be there and when I am ready I will assert My control.”

If we want a connection with Pesach, it must be that this is the festival that shows how low man can sink and how high he can rise. The despair and gloom of Egyptian slavery is everyman’s depth of darkness. The Hebrew yearning for freedom is everyman’s saving grace. Man can be pulled towards either pole.

Pesach proves that breaking free and bringing the Messiah is possible. The Angel of Death can and will be vanquished and the Holy One, blessed be He, will have the last laugh and rule forever.

In Egypt the Israelites were fed hard biscuit-like bread, even though the Egyptians knew the leavening process.

Matzah and chametz are both made from the same ingredients – flour and water. The flour used for matzah is carefully supervised to ensure it does not come into contact with moisture, which would cause fermentation. The water is left in a sealed vessel overnight.

The kneading, rolling and baking are done extremely fast, ensuring that no fermentation takes place. The utensils and machinery are constantly cleaned.

Egg matzot are not used on the first two evenings of the festival; on the other days they are allowed only for the sick and elderly.

Several reasons are given for the three matzot. Since we need two whole matzot (replacing the usual two challot) for “motzi”, and by that stage we have already broken the middle matzah, we need to start off with three.

(We break the middle matzah in order to have “bread of affliction”; slaves were given broken bits, not complete matzot. This also symbolises the splitting of the Red Sea.)

In addition, three matzot represent the three categories of Jews – Kohen, Levi and Yisrael – symbolising the universality of the festival.

A further view links the three matzot with the three patriarchs, Abraham, Isaac and Jacob, and the four cups of wine with the four matriarchs, Sarah, Rebekah, Rachel and Leah, once again stressing that Pesach is for everyone, male and female, young and old.

Some use horseradish, but this has the drawback that one can only eat a very small amount. Others prefer romaine lettuce.

The symbolism is obvious: the Egyptians embittered the lives of the Israelites and we re-live the suffering of our ancestors.

The shank bone is displayed but not eaten, as we have no Temple and the offering of the paschal lamb is not possible.

The bone we place on the table recalls the lamb which the Israelites were commanded to slaughter in Egypt to show their defiance of the Egyptians, for whom the lamb was a sacred animal. The blood of the lamb was placed on Israelite doorposts to enable the angel of death to pass over their houses.

In ancient times, every family brought a lamb to Jerusalem to be duly slaughtered and eaten in company, and this was the origin of the family gathering for a Pesach meal where questions were asked and answered, the events of history were reconstructed, and the future redemption was discussed.

This represents the “chagigah” or roasted festival sacrifice. Other interpretations note that the egg is the symbol of new life since Pesach is the spring festival in Israel.

The messianic redemption will take place in Nisan and bring new life to Israel and the world.

The roasted egg is not linked with the custom of eating hard-boiled eggs during the Seder meal, which may reflect an ancient custom among well-bred Romans.

Wine is part of every Jewish celebration. The Psalmist tells us, “Wine gladdens the heart of man” (Psalm 104:15).

In the Jerusalem Talmud (P’sachim 10:1), Rabbi Yochanan explains that the four cups symbolise the four “ge’ulot” (promises of redemption) in Sh’mot (Exodus) 6:6-7 – “I will bring you out, I will deliver you, I will redeem you, I will take you to Me as a people”.

Rabbi Yochanan actually calls them four redemptions, but in the Torah T’mimah, Rabbi Baruch Epstein argues that there was only one redemption, though the four phrases represent four stages.

These are identified by Rabbi Milton Steinberg as political (“I will bring you out from under the burdens of the Egyptians”), economic (“I will deliver you from their bondage”), intellectual (“I will redeem you” – from slavery of the intellect) and spiritual (“I will take you to Me as a people and I will be your God”).

In fact the Torah has a fifth promise of redemption, “I will bring you in to the Land” and as this promise is not yet completely fulfilled, we fill a fifth cup but do not drink it.

We call it the Cup of Elijah, because Elijah will solve all the accumulated problems of the past and as harbinger of the Messiah will usher in the time when everyone will recognise the redemption and drink to its fulfilment.

Women are exempt from some commandments but not from the four cups of wine, since it was because of the merit of the righteous women that the Israelites were redeemed from Egypt (Sotah 11b).

Other parts of the Haggadah also come in fours – four sons, four questions, etc. – which remind us that even as slaves in Egypt our ancestors lived by four tenets: they retained their Hebrew names, they spoke Hebrew, they refrained from immorality, and they did not speak badly of each other.

A sweet paste made of apples, nuts and wine, “Charoset”, from “cheres”, “clay”, reminds us of the clay and bricks the slaves made for Pharaoh.

“Karpas” is a vegetable (usually parsley or potato) that serves as a reminder that the Israelites used hyssop to mark their doors in Egypt so that the angel of death would pass over their houses.

Dipping karpas into salt water has its parallel in the dipping of maror into charoset, because sweet and sour are antidotes to each other, and the festival commemorates both sad and happy events.

Representing the tears of the downtrodden slaves, and reminding us to feel the pain not only of our own people but of all who suffer degradation and discrimination.