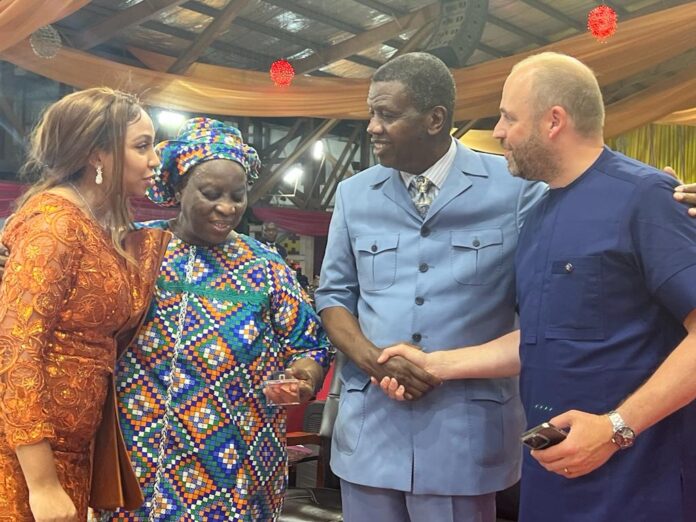 Magen David Adom UK continues to lead the way in opening new regions and audiences for Israel’s only national emergency medical, disaster, ambulance and blood bank service.
On Wednesday 10th August, MDA UK Chief Executive Daniel Burger gave a keynote speech to one million people at the 2022 RCCG (The Redeemed Christian Church of God) 70th anniversary international Perfect Jubilee Convention in Lagos, Nigeria.
In his speech, Burger thanked the General Overseer Pastor E. A. Adeboye and Mother-in-Israel Pastor (Mrs) Folu Adeboye for their continuing philanthropy towards the organisation.
Accompanied by the Africa Coordinator of Magen David Adom in Israel, Mrs Oluwatobi (Tobi) Lovv the Nigerian -Israeli entrepreneur and founder of Sharelovv International which fosters co-operation between the State of Israel and Africa, Mr Burger expressed gratitude that the ambulances donated by the Adeboyes had contributed towards saving 23,000 lives and birthing over 1,000 babies.
The Adeboyes were so moved by the tribute that they have subsequently committed to donating a further two ambulances in the coming weeks.
Speaking on his return to the UK, Mr Burger said, “The support for Magen David Adom in Nigeria is immense. I could not believe that one million people turned up and were able to hear about our work. Their commitment to saving more lives is genuinely incredible.”
Tobi Lovv, who has been instrumental in orchestrating the relationship, said, “The people of Nigeria are staunch friends of Israel. We are committed to the land and its peoples and we are committed to being a lifesaving force for good in the region.”