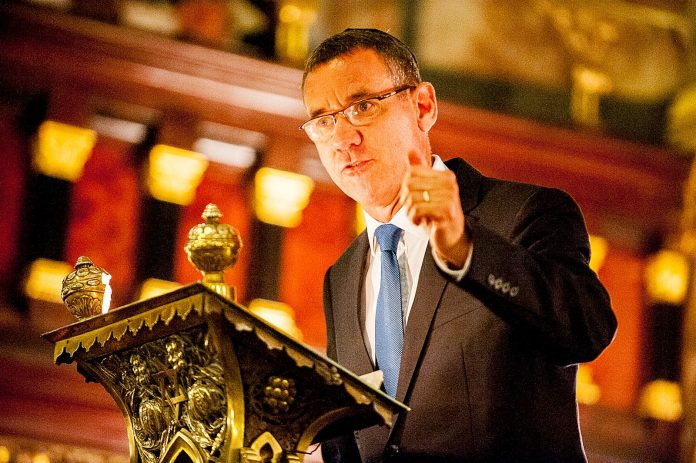 Around 160 Balfour Declaration celebrations are taking place across the country this week.
Israeli Prime Minister Benjamin Netanyahu arrived in London on Wednesday for a series of events to mark the centenary of the 1917 Balfour Declaration, when the British Government expressed its support for the creation of a Jewish national home.

Prime Minister Benjamin Netanyahu will attend several events including a dinner with British Prime Minister Theresa May. Mrs May has said that Britain should mark the centenary “with pride,” whilst Foreign Secretary Boris Johnson called the declaration “indispensable to the creation of a great nation.”

At Sunday’s weekly Cabinet meeting, Netanyahu said the Declaration “started the international movements that led to Israel’s establishment… The state would not have been established without settlement, without the sacrifice and without the willingness to fight for it, but the international setting in motion was without doubt the Balfour Declaration.” The Knesset will also commemorate the centenary of the Declaration at a ceremony next week, which members of the Joint List have announced they will boycott.

The historic New West End Synagogue in West London was honoured to host a special ceremony for almost 600 people last Sunday with a concept of ‘Hakarat Hatov,’ (gratitude).
The New West End is one of the oldest synagogues in the UK and given that Lord Rothchild, Herbert Samuel and the first Israeli President Chaim Weizmann were members of the Synagogue, it was a fitting setting to host the event where the special Guests of Honour Chief Rabbi Ephraim Mirvis, Israeli Ambassador Mark Regev and Baroness Ruth Deech all addressed the packed audience.

The popular shul Rabbi, Moshe Freedman began with an eloquent and warm welcome and then gave a brief account of the years leading up to the famous Balfour declaration written on 2 Nov, 1917 and its subsequent aftermath.

Baroness Ruth Deech then read a response letter from the then Chief Rabbi Hertz in response to the Balfour Declaration.

Following the Baroness, Chief Rabbi Ephraim Mirvis then gave a brief account of the Jewish people’s history from entering into the Land of Israel nearly 3500 years ago and our subsequent scattering around the world until the present day.

No one can doubt Rabbi Mirvis’ words when he said “We are witnessing the return of the Jewish people to their land from all over the world before our very eyes,” as Israel’s population figures continues to rise.

Next the Israeli Ambassador Mark Regev pointed out in clear and simple language, that the Israeli Arab community living in Israel are the only Arab community throughout the greater Middle East that has consistently enjoyed both civil and religious rights. “In what other Middle Eastern country can an Arab citizen stand up and say that the President is an idiot, the Prime Minister should resign and the government is rotten? – only Israel.”

The Ambassador, who is an experienced communicator, having served as the official spokesperson for three Prime Minister’s (Ariel Sharon, Ehud Olmert and Benjamin Netanyahu) said, “that freedom of speech of all its citizens is upheld and is sacrosanct.”
Mr Regev closed his talk by saying “that you can be proud of Britain’s role in helping to establish the State of Israel and you can be proud of the State of Israel which over the last 70 years has built a strong, vibrant, free, democratic Jewish state.”
Chazan Jonathan Ben Garcia conducted the ceremony, accompanied by Mosaic Voices, the Choir of the New West End Synagogue and Musical Director, Michael Etherton.

Speaking about the event, Alan Aziz, United Synagogue Director of Development, said: “The Balfour Declaration is a tremendously significant event in Jewish history and as such it is extremely important that this historic occasion is recognised and celebrated in a fitting manner. We hope that this ceremony goes some way to showing our gratitude for the Declaration that helped re-establish a Jewish homeland in Israel. Many thanks go to Rabbi Moshe Freedman and the New West End Synagogue for hosting this wonderful event as well as to all who took part in and attended the ceremony