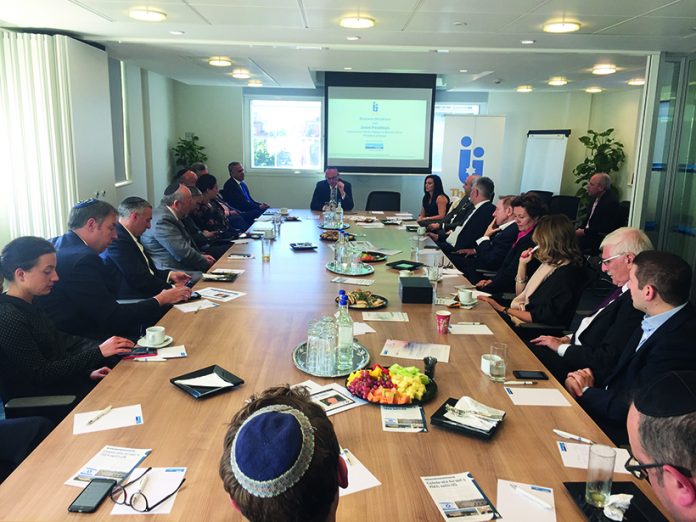 The US Development team held its latest Business Breakfast. Hosted by the breakfast’s sponsor, Bank Leumi, participants heard from Jason Pearlman, consultant Media Advisor to Reuven Rivlin, the president of Israel. Over coffee and bagels the former UK resident shared insights into the challenge for Israeli society to build meaningful connections within its diverse cultures – known as the shared hope for Israel. He explained this by sharing how the Israeli education system is in fact made of four different systems to cater for the four ‘tribes’ of Israel – strictly Orthodox, modern Orthodox, secular and Arab. There are programmes and activities that allow these ‘tribes’ to get to know and understand each other. He stated that just as Israel has been a beacon in the world of science and technology, so too it has much to offer the world in creating an integrated society made up of people with a wide spectrum of beliefs and lifestyles.
Following the presentation there was a question-and-answer session.Questions included an update on the situation in Gaza and the role of Qatar, the impact that terrorist incidents in Europe have had on the perception of Israel, and the role that diaspora Jews have regarding Israel. Jason commented that in addition to the four ‘tribes’ within Israel, the diaspora is known as the fifth ‘tribe’ – although UK Jewry are often overlooked due to our relatively small size compared with the North American community.
US Director of Development Alan Aziz said, “It was a very interesting presentation this morning from Jason, and our hosts Bank Leumi made us most welcome.”