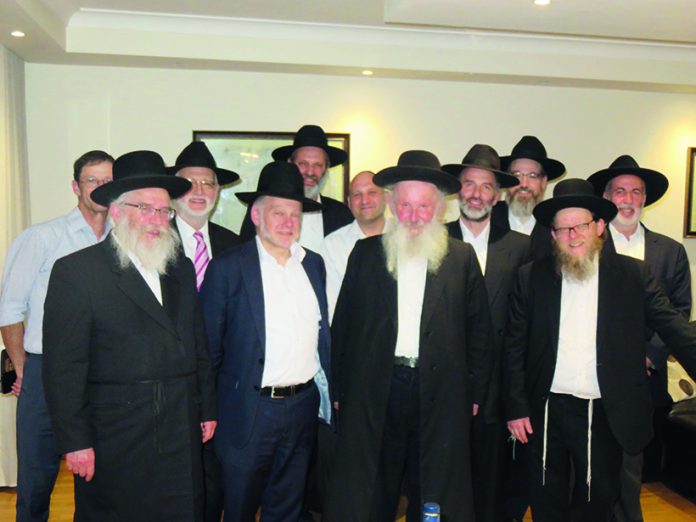 One of Edgware’s longest running shiurim held a Siyum on Monday evening to mark the completion of tractate ‘Baba Kamma.’
The Shiur, held every Monday and Wednesday evening at Edgware Machzikei Hadass Shul, is led by the well-known educator Rabbi Osher Sternbuch. The shiur progresses through the gemara in great depth, invariably enhanced by the enthusiastic participation and analytical questioning of the participants.
The first gemara to be learned, Baba Metzia, took 11 years. Baba Kamma took 10 years. The Siyum was therefore a significant milestone and a very festive event. It included commencing Gemara Kesubos, the next tractate to be learned.
Rabbi Sternbuch cited a number of sources to illustrate the vital importance of learning Torah and the tremendous reward that comes to those who do so, as well as to the wives who encourage to their husbands to learn. He praised the members of the shiur, whose dedication and commitment to learning made every session a special experience. He paid tribute to the founder of the shiur, Mr Shimon Lewis, and to Mr and Mrs Yisroel Goldstein for hosting the Siyum at their home. He paid particular tribute to Mr Alan Blake, z’l, a devoted shiur participant who sadly passed away almost two years ago, and he welcomed Alan’s son Gideon to the siyum.
Mr Goldstein thanked Rabbi Sternbuch for the tremendous diligence and scholarship he put into the preparation of every shiur and for the exceptionally lively and spirited way it was always delivered. Mr Chaim Pollins delivered a d’var Torah on behalf of the Edgware Machzikei Hadass kehillah, and he apologised for the absence of the Rav, Rabbi Eliezer Schneebalg, who was unable to attend due to a prior commitment. The kehillah’s Rosh Kollel, Rabbi Michoel Schwarcz, led the bentching.