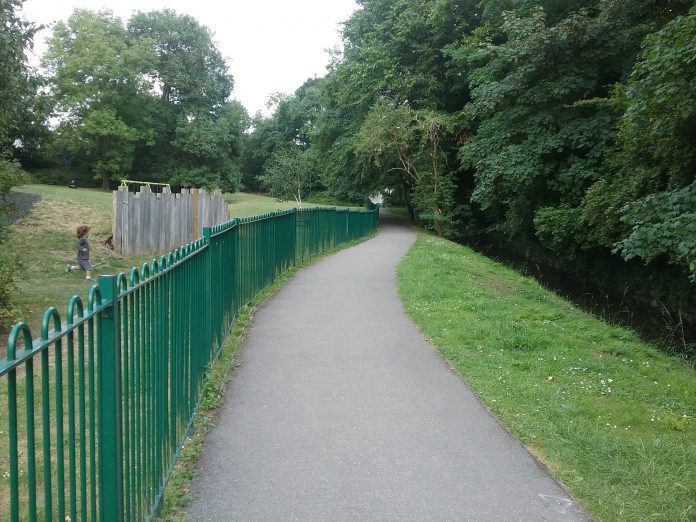 On Monday evening the Hendon Area Committee of Barnet Council unanimously approved funding for the installation of lighting along Brookside Walk, Golders Green. This is a 125 -metre long pedestrian pathway between Hendon and Golders Green, running between the lit Capital Ring path and the lit Transport for London path, adjacent to the North Circular Road
The decision has been welcomed by numerous local residents who have been campaigning for lighting for a considerable time. The pathway is a much quicker and direct pedestrian route than walking along the alternative main roads, namely the North Circular Road and Bridge Lane.
The Area Committee agreed funding to the tune of £25,000 from the designated Community Infrastructure Levy (CIL) which it has authority to administer. Any balance of costs will be made available from the Network Recovery budget by the Environment Committee, chaired by Golders Green Councillor Dean Cohen, who played a major role throughout.
Mr Pini Strom, who addressed the Committee on behalf of residents, said that Brookside Walk was used by hundreds of residents every day, in particular parents and children commuting in foot between their homes and the many local schools. It was also heavily used on Sabbaths and Festivals. He said: “Safety is a continuing concern in the dark and proper lighting, which has always been missing along this section, would certainly alleviate the situation”
Committee Chairman Cllr Brian Gordon explained that £25,000 was part of a much larger budget available to the committee to allocate prudently during the course of each year for environmental and community needs. He said: “Funding the lighting of this pathway is undoubtedly a worthwhile public investment for the benefit of local residents.”