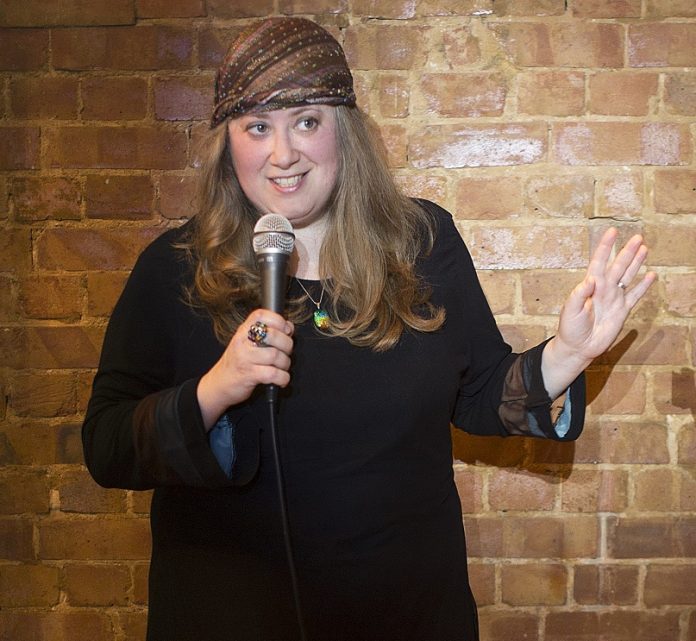 Being an orthodox Jewish woman, and a stand-up comedian may not be an obvious combination, but Rachel Creeger has managed to find the right balance, and it is this dual identity that inspired her debut stand-up show, ‘It’s No Job For A Nice Jewish Girl’.

The show explores her Jewish identity growing up in Essex, and how throughout her life, she has had to tackle being part of two different worlds. She describes the show as being about fitting in, and belonging.“It is quite a personal show. I talk about my own family, particularly my grandparents who also had to find a way of ‘fitting in’ as immigrants from Eastern Europe to Britain.”

Rachel’s road to comedy has been an interesting one, having had a somewhat varied career path which has included being a dental nurse, a social worker, and even a one-time popstar in an orthodox all-girl band, ‘Kol Sheva’. Her passion for performing started at a young age, and was very much influenced by her own family. As she explains, “My dad’s family were very funny, and this is probably where I get it from. I remember how on Shabbat afternoons, everyone would sit around and tell jokes, and I think that is where I learnt the most about comedic timing. Many of my family and friends are now worried to say or do anything in front of me, in case they end up as material in my next show!”

As well as being a performer, Rachel is also a prolific writer and director of award winning theatre through her company, Time2Shine Productions. She explains, “I’ve been a writer pretty much as long as I’ve been able to hold a pencil, and have been involved in a whole variety of things from plays to blog posts, as well as teaching creative writing to adults and kids. I really enjoy being able to develop my writing in so many areas.” Over the years, through the various productions she has worked on, she has a huge collection of props and costumes which they hire out for shows and events with 10% of the hire fee going to GIFT, which helps those within the local community in need. She also hires costumes for Purim, with 100% of all profits going to the charity.

She also runs a monthly comedy night held upstairs at the Adam and Eve pub in Mill Hill, which she often compered, but the move into becoming a full-fledged stand up is a much more recent thing, and the idea for writing her own show and taking it to the Edinburgh festival came about through what she calls ‘a perfect storm’ of events.

When a comic friend introduced her to someone as a comedian, Rachel wasn’t sure how to react. She recounts, “My immediate response when he said that was to say ‘Well, not really…’. My friend asked me afterwards why I always said that? Other friends in the industry had also begun challenging me on the same subject, and asking why I don’t take myself more seriously (ironic as a comedian!) It was only when another comic sat me down and said ‘enough already’ that I started thinking that maybe I could actually do it”. When Rachel finally revealed her comedic intentions to friends and family, she was a little taken aback by their response. She explains, “I thought everyone would be really surprised, but I think they were just more surprised that it had taken me so long to make the leap.”
Having the support of her friends, and family has made a real difference, and she is especially grateful for all the encouragement from her husband, Mark has given her. “Whenever we went to see comedy performers, Mark would always said “One day, that’ll be you!”, and this year it actually was.” Although she had previously been to the Edinburgh festival as a writer, director and performer, doing this as a solo show was something that she was excited to do. “The show was the culmination of a lot of hard work. I was fairly convinced that only a handful of people would come to see it, but it was amazing to see the venue packed out day after day.”

Before taking the show to Edinburgh, Rachel did a number of preview gigs around the country to help her develop and work on her material. As part of this she performed at the Greater Manchester Fringe Festival where she won Best Comedy Award, which was a great achievement and boosted her confidence for her debut Edinburgh debut. As she explains, “As a modern Orthodox woman, receiving recognition as a stand-up comedian from both within the Jewish world, as well as the wider community means a lot to me, and shows that even though my show is unashamedly Jewish, there are subjects within it that everyone can relate to. Part of the challenge when performing is being able to make my material accessible to both Jewish and non-Jewish audiences, but I think that my comedy is really about issues that we all share, no matter what our background.”

For Rachel, her Judaism has always been very important to her, and is very much part of who she is both on and off stage. “Being Jewish and being in this kind of industry can be tricky. It means turning down gigs if they are on Shabbat, which can be hard especially when you are trying to establish yourself, but that’s just part of who I am, and I hope people respect me for what I believe.”

During her time in Edinburgh over the summer, she ensured that she was able to keep Shabbat and Kashrut, even whilst sharing a flat. “My flatmates understood that I did things a little differently, but they were really cool with it, and didn’t mind sharing challah or rugelach with me on Shabbat.

She is very much involved in her local community, and also visits various shul communities as a guest speaker, which is something that she really enjoys. She has also been involved in speech writing, often helping bat mitzvah girls to write their Dvar Torah, giving advice on not only what to say, but the best way to present it.

Whilst she doesn’t want her Judaism to be her whole ‘schtick’, Rachel recognises that she is still a bit of a novelty within the mainstream comedy circuit. “There are not many acts out there that look like like me, but I think being a bit different can only be a good thing, and helps to break down stereotypes and assumptions.”

Due to popular demand, ‘It’s No Job For A Nice Jewish Girl’ will be returning to the Edinburgh Fringe this summer and continuing to tour the UK until the end of this year. Rachel is currently working on her next show which will launch in 2019. For up to date information please visit

Do you know anyone who specialises in an area of female expertise and would like to be featured on this page? Let us know by emailing
micaela@thejewishweekly.com