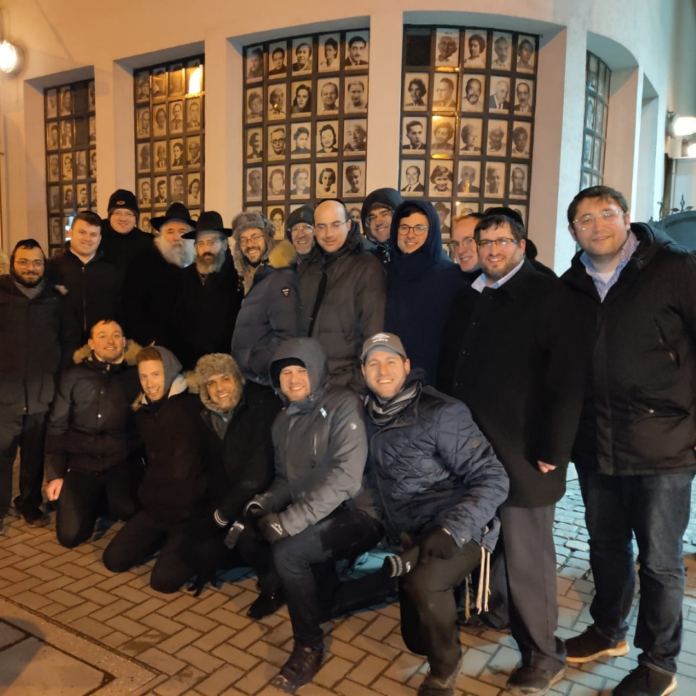 Members of the Beis Yisroel Shul of Manchester went on a trip to Poland to mekomos hakedoshim and to Auschwitz and Birkenau, together with their Rov, Rabbi Yehoshua Ahron Sofer shlita and with Rabbi Yossi Chazan shlita. Early Sunday morning the group flew out to Rzeszow, Poland, where there was a coach waiting for them upon their arrival. The first stop was to Shinov to the Kever of the Divrei Yechezkel, Rav Yechezkel Shraga Halbershtam zt’’l. On the coach, Rabbi Sofer spoke about the Halachos and the power of davening at kivrei tzaddikim and about the Divrei Yechezkel, followed by Rabbi Chazan giving the historical background of Rav Yechezkel Shraga Halbershtam zt’’l.

From Shinov, they went to Lancut where Rabbi Chazan’s father in law lived before the war. They davened Mincha in an old shul which survived the Nazi invasion. The Lancut shul is beautifully decorated with many parts of davening painted on the wall. From the shul, they went to daven at the kever of Rav Naftoli of Rapshitz zt’’l who is buried in Lancut.

From Lancut they went to Lizhensk to daven at the Kever of the Rebbe, Reb Elimelech zt’’l, where Rabbi Sofer and Rabbi Chazan spoke about the gadlus of the Rebbe, Reb Elimelech saying many stories of his greatness and Avodas Hashem. This was followed with a visit to Tarnow where they saw an old Bima from the ruins of a shul destroyed by the Nazis and visited the area from where Tarnow’s Jewish community where rounded up and sent to the concentration camps.

It was already dark, when the group went to Zbylitowska Gora mass grave in the forest. Rabbi Sofer spoke about the Aveilus for an individual who passed away recently versus an Aveilus of a large group of people, a mass grave, how we must think of them all as individual people who died al pi Kiddush Hashem. Following saying Tehillim and a keil molei rachamim, inspiring songs including Av Harachamim, Ani Maamin and Yizkireim were song at the mass grave.

The next morning they davened Shacharis in the shul of the Rema. After a quick breakfast, they began travelling to Auschwitz. Along the way, Rabbi Sofer spoke about the sad history of the town of Auschwitz and he encouraged the group to try hear the voices of the past and what messages they would be telling us today. In Bikenau and in Auschwitz the voices are so loud. The harsh yelling of the Gestapo. The roll call. The shots of guns and the barking of dogs. One can hear the desperate voices of the mothers, begging, pleading. You can hear the confused voices of the children, the starving children.

And if you listen carefully, you can hear a beautiful chorus of the voices speaking to us, comforting us. “Don’t look for us here” they say. Poland is just a shell. Go home. Listen to us by the tishen of Ger and Sanz, and Aleksander and Satmar and Bobov and Belz. Listen to the chassidim singing. Listen to the rebbe directing his flock.

Listen to us in your Yeshivos – in Ponovezh and Mir and Brisk and Lakewood. Listen to them argue a Tosofos. Listen to them engage in discussion and sevaros. You are hearing us speak.

Go to your Beis Yaakov. Stand by the entrance to the building when the girls come in for a day of Torahdike education. Listen to how they talk to each other about topics big and small. Listen with your heart. Those are our voices.

In the barracks, Rabbi Chazan spoke about a previous visit to the camps with a lady from Manchester who lost eighty memmbers of her family but she survived. She asked him “Do I need to make the brocha of sheosa li neis bamakom hazeh, as I was here and was saved?” Can you imagine the ahavas Hashem to ask such a question? Then Rabbi Sofer spoke about the mesiras nefesh of so many yidden keeping mitzvos under the threat of death if caught by the Nazis. Rabbi Sofer told the story about Yosef Weiss, a bachur from Slovakia who arrived in Auschwitz who was in the same bunk as Mottel, a Gerer chossid who kept a calendar of all the Yomim Toivim. On Seder night, Mottel gathered everyone in the bunk and they had a seder. They had no matzos but plenty of Maror. They had no four cups of red wine but they had more than four cups of red Yiddishe blood spilled by the Nazis. They had some potatoes and began the Seder. Mottel had a beautiful voice and they sang all the songs of the Haggadah, including Chad gadya till the end, when Hakodesh Baruch Hu comes and kills the maalach  hamoves who killed the shochet. They knew too well who the maalach hamoves was and who was the shochet. Yosef Weiss continues that what gave him the most strength on that night was when they sang Vhei Sheomda how in every generation they try to destroy us however Hashem saves us, and with that everyone in the group started singing Vhei sheomda standing in the barracks, as a living proof that Hashem indeed saves us.

One of the most powerful moments of the trip was standing at the end of the train tracks in Bikenau opposite the gas chambers where members of the Shul made Siyumim on three different Meschates followed by a Kaddish. After the Kaddish, Rabbi Sofer said over the story of the Phoneveth Rov who went to the arch of Titus and called out “Titus Titus, where are you? You are gone and we are still here” and Rabbi Sofer called out “Hitler Hitler, where are you? You wanted to destroy all the Talmud Leherers, you tried to kill all the Yidden. Hitler, you didn’t learn from Titus. You are gone and we are here opposite the crematoria and we have made Siyumim on Gemora! Hitler Hitler, you are gone and Klal Yisroel is here, dedicated to learning Torah”. This was followed with saying the Kinnoh on the holocaust written by the late Bobver Rebbe zt’’l.

That evening, the group went to daven at the various kevorim in the different cemeteries in Cracow. Rabbi Chazan spoke by various Kevorim about the greatness of the niftorim buried there. They then went to visit the factory of Oscar Schindler who saved many yidden during the Holocaust. Supper was served the building of Sora Schnierer’s Beis Yaakov, where Rabbi Sofer spoke about the difference before the Beis Yaakov movement was established and after it was established.

The trip was meticulously arranged, down to the last detail, by shul member Mr Yehuda Fagelman. Everyone on the trip came back spiritually inspired and thoroughly enjoyed the fantastic trip. 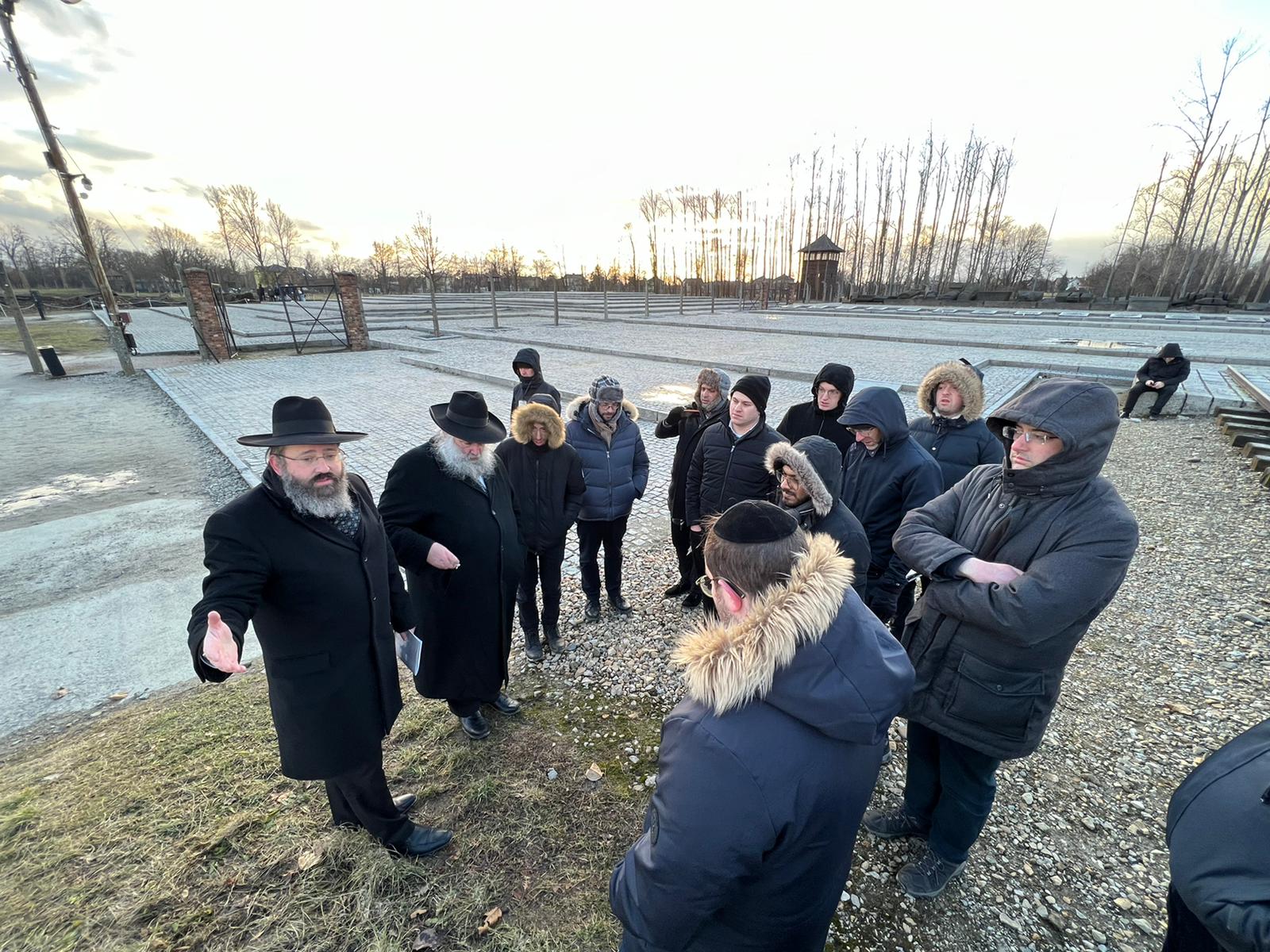 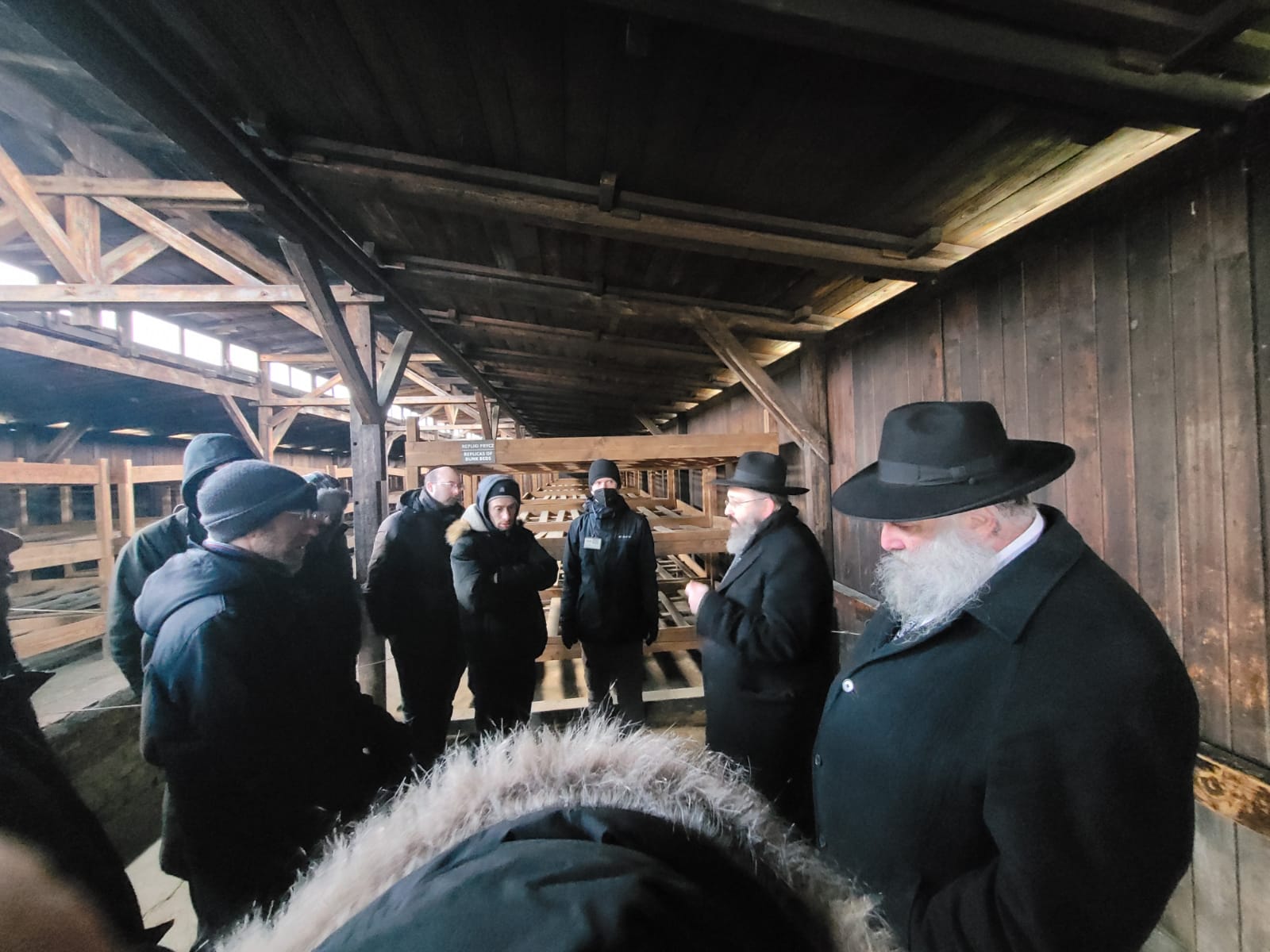 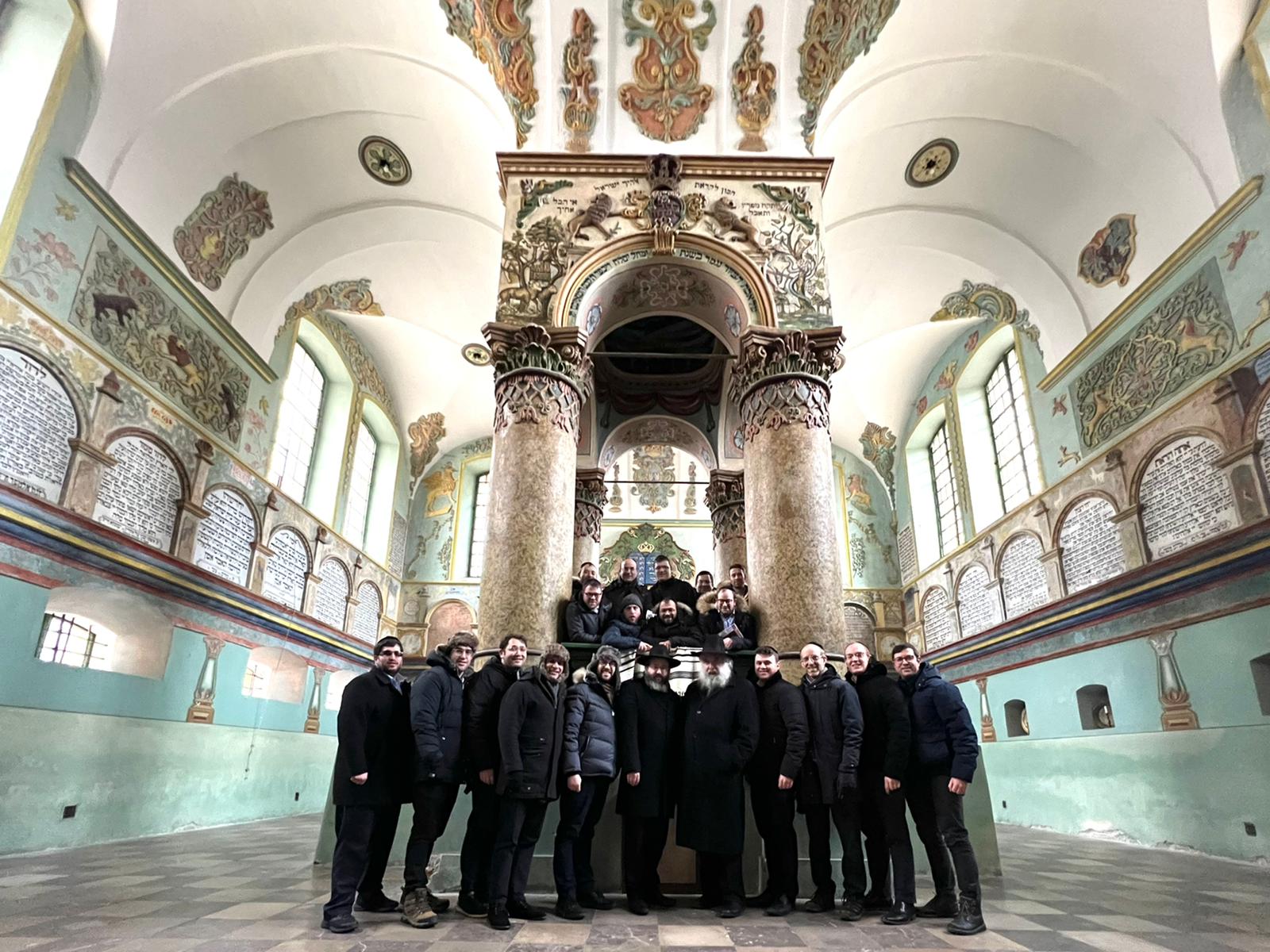 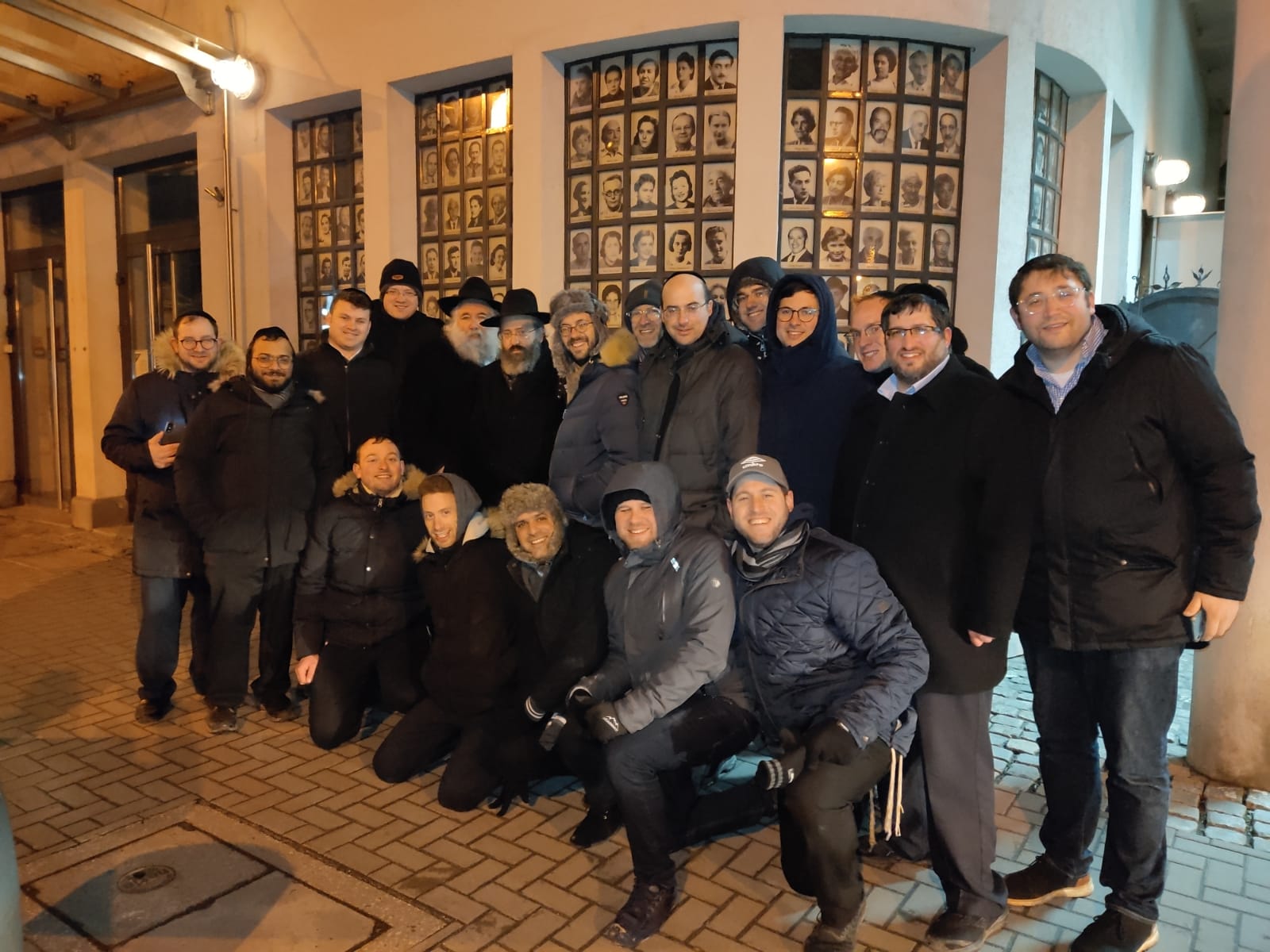