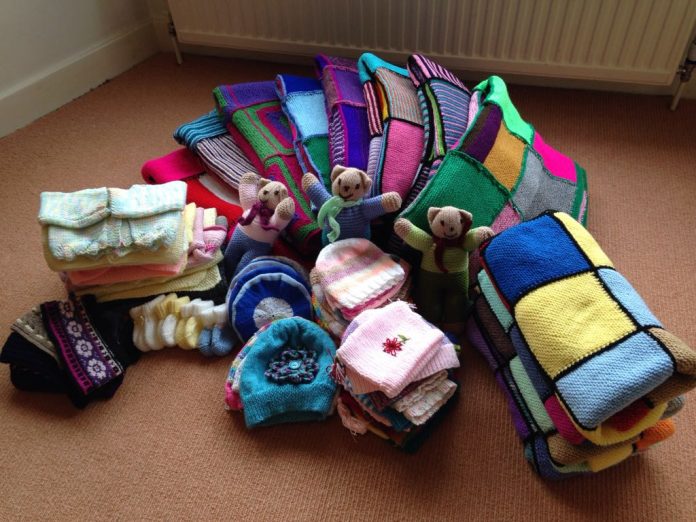 The perfect antidote to social media is the Belmont Knitting Circle, where you have to be mindful of the present moment if you don’t want to drop a stitch.
Starting about eight years ago, the Belmont Knitting Circle has raised over £10,000 for various charities in the UK, Eastern Europe and Israel, whilst providing a calm and friendly forum for people from local shuls and the Stanmore Baptist Church.
Working together, members of the BKC create beautifully designed blankets, hats and teddy bears – each item with its own BKC designer label, “Made with love by Belmont Knitting Circle’.
The knitting circle was conceived as a result of the ‘Pomegranate’ committee, a part of World Jewish Relief, which helped vulnerable women in Eastern Europe. Some members of the Pomegranate committee formed ‘PomKnits’ whose members came together to create colourful blankets, which were sent by World Jewish Relief to keep warm elderly communities in parts of Eastern Europe, such as Ukraine and Moldova.
‘PomKnit’ members and local knitters from various local shuls (Belmont, Bushey and Stanmore) as well as the Stanmore Baptist Church, formed the Belmont Knitting Circle. BKC members meet on the first Monday of each month at 8pm (unless it’s Rosh Chodesh) in the home of Belmont shul member Jacqui Segal.
Her home is crammed with baskets of knitting wool, blankets, hats, teddy bears and knitted squares. The latter are sent to volunteers who crochet them into richly coloured blankets and then Jacqui vacuum-packs quantities of knitted products and delivers them to Israeli charities.
The Belmont Knitting Circle also works with AKIM in Haifa, which was set up to help people with mental and physical disabilities with employment, housing, welfare and education. BKC provides AKIM’s severely disabled children with brightly coloured bed blankets.
The BKC recently branched out to provide the neonatal unit at St Thomas’s Hospital with ‘bonding squares’ used for premature and sick babies who cannot nursed. One square is placed with a premature baby and another worn against the mother’s skin, then the squares are swapped round every 12 hours or each time the mother visits.
These knitted squares help mothers to bond with their premature babies in an incubator, as they can smell their mother’s scent even when she isn’t there. Mothers say that bonding squares can also help them to express milk, as their baby’s scent can trigger the hormones needed to produce and express milk.
As word of the BKC’s knitting exploits got out on the charity grapevine, the group met Rabbi Eitan Kupietzky based at Israeli charity the Gimmel Foundation, which sponsors after school activities and provides disadvantaged and ‘at risk’ children with the skills needed to fully integrate into society. BKC provided knitted items for the Gimmel Foundation and in turn, Rabbi Kupietzky was a guest speaker at BKC’s regular Knit One Nosh One (KONO) events which helped raise £1,500 for World Jewish Relief and St Luke’s Hospice.
As a result of their association with Rabbi Kupietzky and the Gimmel Foundation, the Belmont Knitting Circle also creates hats for children in cancer wards in two hospitals: Tel Hashomer and Sheba; as well as for Israeli soldiers on active service.
In 2015, 60 people joined in the fourth KONO evening to raise funds in memory of Belmont member Janis Isbitt z’l for Chai Cancer, which was then able to buy a multigym and two therapy chairs.
The Belmont Knitting Circle has provided over 80 multicoloured blankets, not only to AKIM Tzfat, AKIM Haifa and the needy community in Kiryat Malachi, but also to Kishorit which provides a home for adults with special needs in Western Galilee.
Hearing that one of the residents at Kishorit was an ardent Arsenal fan, Betty Arnold created an Arsenal FC blanket for him – but the BKC stressed that it would also be happy to design a blanket for a Kishorit Spurs fan!