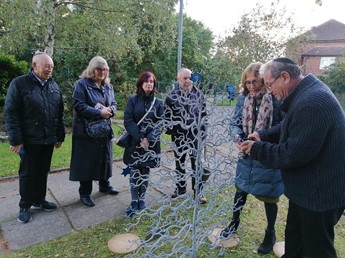 Sunday 4th October saw the completion of a project to honour people of courage. In the grounds of the synagogue two 3-dimensional tree sculptures have been erected. One tree celebrates Jewish armed heroism. The Magen David engravings attached to the tree are for the relatives of synagogue members who served in WW1 and WW2 on both sides of the conflict, the many who served in the Allied forces on land, sea and in the air. The tree also honours older members of Belmont, many still with us, who were called up to National Service after the war and more recently members and their children who have served in the IDF. Two of the people represented were combatants in the Suez campaign, one with the IDF the other with British forces. Others represented on the tree undertook national service in the UK and South Africa, served in the Jewish Brigade or were partisans from Denmark to Minsk.

The second tree honours the Righteous of the Nations.  Four of the round medallions are dedicated to individuals who cared for and saved members or their relatives. These include some Dutch families who fostered a Belmont member whilst his parents went into hiding, an Order of German monks who cared for a disabled Jewish boy throughout the war, and an entire Polish village that did not betray a lad who the entire village knew to be Jewish. Also on this tree are medallions for the twenty two UK citizens honoured by Yad Vashem, Princess Alice of Greece and the headteacher of a school in France who hid Jews. Belmont is putting together a book to commemorate and celebrate the achievements of both sets of heroes.