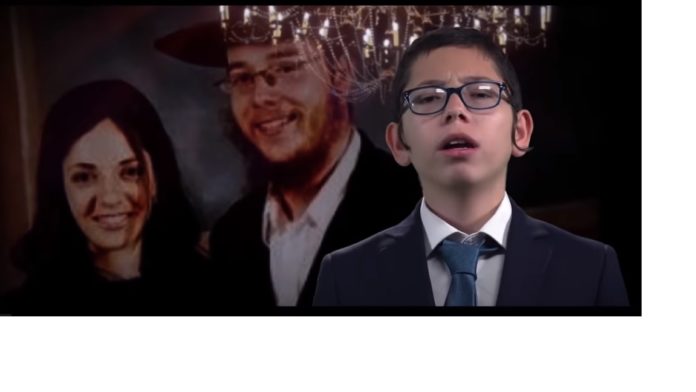 India and Israel are united against terrorism was the standout message at the barmitzvah of Chabad Mumbai survivor Moshe Holtzberg in Afula last weekend.

Hundreds, including Sandra Samuel, who saved Moshe during a horrific terror attack across the city in 2008, celebrated the landmark event at Kfar Chabad on Sunday.

Moshe’s grandparents, Rabbi Shimon and Yehudit Rosenberg, who brought him up, together with Rabbi Nachman and Freida Holtzberg of New York were also in attendance.

The simcha though was tinged with tragedy as Moshe’s parents, Rabbi Gabi and Rebbetzin Holtzberg, were among more than 170 people murdered and 300 people injured in an atrocity that shocked the world in 2008.

Rabbi and Rebbetzin Holtzberg were killed at Nariman Chabad House, one of 12 targets attacked by Islamist terrorist group Lashkar-e-Taiba from Pakistan. Their funeral took place at the same venue as their son’s barmitzvah.

During proceedings, guests watched a moving video of Moshe pledging to walk in his parent’s footsteps at their graves on the Mount of Olives in Jerusalem.

His vow was witnessed by guests as Moshe’s grandfathers stood aside him during his rendition of a classic Chassidic discourse, first recited by the fifth Lubavitcher Rebbe, Rabbi Shalom Dov Ber Schneerson, at his bar mitzvah in the 1870s.

Among many notable moments, India’s Prime Minister Narendra Modi sent a letter to Moshe to mark the occasion, recalling the past but looking to the future.

“As you make this important transition and cross a significant landmark in the journey of your life, the courage of Sandra and prayers of the people of India will continue to bless you for a long, healthy and successful life,” she noted. “Your story continues to inspire everyone. It is one of miracle and hope overcoming tragedy and immeasurable loss.”

Modi added, “The perpetrators of the cowardly terrorist attack failed. They could not subdue our vibrant diversity. Nor could they dampen our spirit to march forward.

“Today, India and Israel stand together even more determined against terrorism and hatred.”

Modi also offered a blessing for Moshe to fulfil his dream of returning to Mumbai to continue the work of his parents at Chabad House as shaliach to the city.

Netanyahu led congratulatory messages from the State of Israel.

“There is life amidst this tragedy,” commented Netanyahu in a video message. “There is revival and there is hope. You come with the love of the Jewish people, all citizens of Israel and many outside Israel.”

“All Israel is with you,” added Sara Netanyahu. “You have been fighting every day to carry on with life but you are surrounded by so much love from your grandparents.”

US President Donald Trump also sent a message of best wishes on his “significant milestone”.

“May your faith continue to guide, comfort and strengthen you throughout your life,” he said.

Rabbi Shimon Rosenberg of Afula, as in Chadad custom, invited his grandson to read his bar mitzvah speech.

The 2008 attacks took place November 26-29 when 10 Pakistani men travelled from Karachi to Mumbai via boat. The terrorists split into groups before carrying out the attacks using automatic weapons and grenades.

Nine gunmen were killed during the attacks, one survived. Mohammed Ajmal Kasab was executed in November 2012.

The multi-story Chabad centre was refurbished and reopened by Chabad-Lubavitch emissaries Rabbi Israel and Chaya Kozlovsky in their predecessors’ memory in 2014.

Moshe returned to Mumbai accompanied Netanyahu during an emotional six-day trip in January 2018 where Prime Minister Modi welcomed him.

Co-directors Rabbi Israel and Chaya Kozlovsky welcomed both to unveil a state-of-the-art living memorial, which includes a reflection garden, in memory of Moshe’s parents.

Netanyahu told guests the Lubavitcher Rebbe had told him kindling one candle has the power to banish much darkness.

“The Jewish nation is accompanying you all the way,” noted Netanyahu.

Moshe’s grandmothers lit an “eternal flame” in remembrance of the victims.