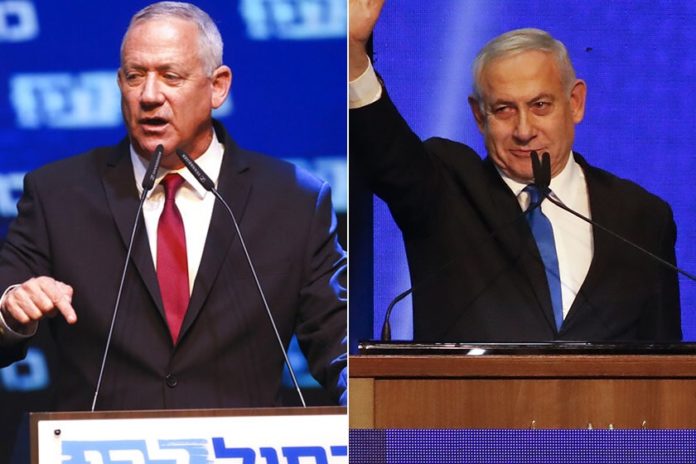 Benny Gantz’s Blue & White Party had edged ahead of Bibi’s Likud Party with 91% of votes counted last night towards the 22nd Knesset.

Gantz gained 32 seats, one ahead of the incumbent Prime Minister seeking a fifth term in office, although this tally could change.

As it stands, Netanyahu is four seats down on April’s election but this historic election race, Israel’s second in five months, is too close to call.

No Israeli party has won an outright majority, Gantz’s bloc appear set to hold 56 seats, one more that Netanyahu’s but neither party can reach 61 seats to form a majority coalition in the 120-seat Knesset.

The Joint List of Arab parties collated 13 seats, the best return for Arab parties in history, but the kingmaker will be Avigdor Liberman’s Yisrael Beytenu Party who have 9 seats.

United Torah Judaism and Yemina polled 8 seats, one ahead of Shas who reverting back to Jewish Home and New Right. The Democratic Union Party picked up six seats, one ahead of Labor-Gesher. Extreme-right party Otzma Yehudit did not pass the electoral threshold, despite favourable polls.

The Central Elections Committee will count “double envelopes” this morning with final results expected to be announced later today.

President Reuven Rivlin will consult party leaders about preferences for Prime Minister before selecting who he thinks can form a coalition.

They do not have to be head of the largest party and have up to 42 days to form a government. If they fail, as Netanyahu did last April, Rivlin can ask another politician to try.

A third election is the least favourable option.

Netanyahu has been in office a record 10 years, but according to many experts faces an uphill task to extend his record stay at the helm.

A Netanyahu-led unity government could take a number of forms.

Netanyahu has stated US President Donald Trump will release the much-hyped Israeli-Palestinian ‘deal of the century’ but Trump might now wait until the government is formed.

Netanyahu was due to speak at next week’s UN General Assembly but cancelled his speech. Foreign Minister Israel Katz will make the address in New York.

A day on from the closely contested election Netanyahu made clear Israel’s choices.

“Having established a right-wing bloc, there are only two options,” he said, “either a government led by me, or a dangerous government that relies on the Arab parties.”

Speaking to a Likud faction meeting, Netanyahu added, “At this time, more than ever, and especially in the face of the enormous security and political challenges at hand, a government that relies on the anti-Zionist parties must not be established,”

Right-wing party heads met at Netanyahu’s office in Jerusalem to pledge support, giving him the backing of 55 Knesset members to form a government, six shy of a majority.

Party leaders agreed to create a joint negotiating team for the power battle with Gantz.

Kingmaker Liberman favours a Likud-Blue and White unity government and increased pressure on Rivlin for this route.

“The key now rests in the hands of the president,” Liberman said yesterday. “He must take a far more active role in forming the coalition. I think he should summon Prime Minister Netanyahu and MK Ganz for a meeting this week, from which will come a message of unity.”

Taking to social media, he noted, “Last night, after the exit polls were released, I heard all kinds of commentators and experts presenting all sorts of scenarios and trying to form imaginary coalitions.

“In order not to waste your time, I want to make it clear, Yisrael Beytenu, as we said throughout the election campaign, will only join a broad, liberal national unity government that consists of three parties, Yisrael Beytenu, Likud, and Blue and White. If Gantz and Netanyahu do not declare this is their intention, if they should not try to call me at all. There is no other option for us.”

Liberman added, “In order to take another option off the table for these coalition builders, I will emphasize, we will not sit in any government with the Joint List or with the Arab parties, together or alone, not in this universe nor in a parallel one. I say sharply and clearly to Netanyahu and Gantz. Don’t waste your time on fruitless efforts to litigate or pile on the pressure.”

Notwithstanding Liberman’s comments, it was reported yesterday that Rivlin will first consult various factions initially.

“The president of the country will convene the factions for a round of consultations after receiving the most accurate assessment of the situation and as soon as possible,” noted a statement.

“The president will do so in full coordination with the chairman of the Central Elections Commission and after hearing all the factions’ positions and taking into account all the relevant considerations.

“The president is aware of the need to form a government in Israel as quickly as possible and fulfil the will of the people as expressed in the election results, alongside the need to avoid a third round of elections. Accordingly, the president will bestow a mandate to form a government after consultations and discussions with the relevant factions and party leaders.”

Gantz has stated he will not sit with Netanyahu in a coalition with corruption charges pending and reportedly approached the Joint List of Arab parties yesterday.

Netanyahu is due to attend a pre-trial hearing next month. He denies all allegations.

After results racked up on Tuesday night, leading candidates addressed party members in the early hours or Wednesday.

“There will not be and cannot be a government that relies on anti-Zionist Arab parties that deny the very existence of Israel as a Jewish and democratic state,” Netanyhau said at the Tel Aviv Convention Center. “Parties that glorify and praise the bloodthirsty terrorists who murder our soldiers, our citizens.”

“I spoke this evening with all the Likud’s partners in the right-wing camp. All of them expressed an unequivocal commitment to banding together. In the coming days, we will enter into negotiations to establish a strong Zionist government and to prevent a dangerous anti-Zionist government.”

He added, “In the near future, my friend President Trump’s ‘deal of the century’ will be presented and the way that negotiations with the president are handled will shape the future of the State of Israel for generations.

“At this time, for all these purposes, Israel needs a strong government, a stable government, a Zionist government. A government committed to Israel as the nation-state of the Jewish people.”

Netanyahu stressed Israel was at a “historical point”, noting security and an existential threat from Iran.

“In recent years, we have brought defensive strength, economic prosperity and political prosperity that are unparalleled in Israeli history,” he said. “We must ensure that these achievements, that we all worked hard to achieve, are maintained in the years to come.”

Gantz was clear he favoured a broad unity government.

“According to the results, Netanyahu was unsuccessful in his mission,” Gantz told supporters in Tel Aviv. “We, on the other hand, proved that the idea called Blue and White, a venture we started a little over six months ago – was successful.”

He added, “It seems that for the second time, Israeli citizens have put their trust in us. More than a million citizens said no to incitement and division and yes to unity. No to corruption and yes to integrity. We promised throughout the campaign, and I promise more vehemently now, that tonight the mission to repair Israeli society begins.

“Of course, we will wait for the real time results, but as it seems, we have accomplished our mission and stood firm in our path.

“Blue and White has been and remains a major and central force in the political sphere.”

Thanking Blue and White partners, Gantz continued, “Israeli society is strong and vital. Nonetheless, it is wounded and it is now time to heal it. We will seek and find consensus from Israeli citizens and share a common prayer for the peace of the state and the peace of all its citizens.”

Gantz confirmed he had spoken with Labor leader Amir Peretz and Meretz head Nitzan Horowitz then reaffirmed that a secular agenda must be adopted in the next coalition.

Liberman was succinct in his viewpoint.

“We’ve always said that a unity government is only possible in emergency situations,” he said.

“I tell every citizen today watching us on television, the situation, both security-wise and economically, are emergency situations. The country, therefore, requires a broad government.

“We will only join a wide, liberal national unity coalition.”