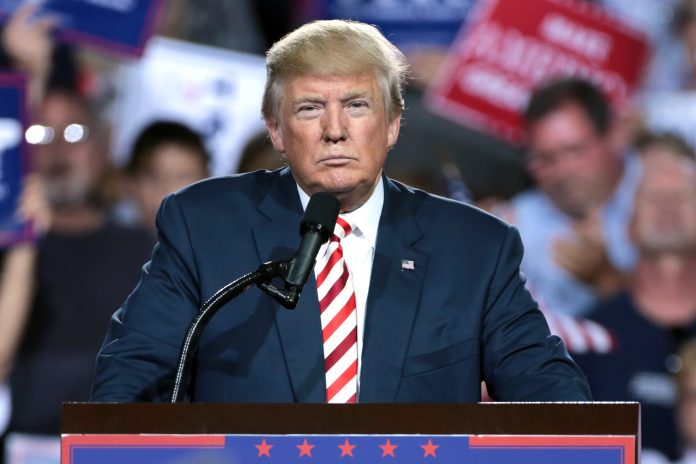 Board of Deputies Vice President Marie van der Zyl has condemned President Donald Trump’s retweets of videos posted by Britain First Deputy Leader Jayda Fransen.
A Downing Street spokesman said Trump’s actions were “wrong”.
The media storm follows Trump’s Twitter account retweeting a trio of inflammatory videos from the British far-right group allegedly showing Muslims committing hate crimes.
Ms Fransen has over 50,000 followers on Twitter.
She responded with glee, posting: “God bless you Trump! God bless America!”
Ms van der Zyl lambasted Trump’s actions, “It is of grave concern that the President of the United States would retweet videos from the deputy leader of Britain First.
“They are a nasty far-right group which seeks to intimidate minorities, especially Muslims.
“We call on the President to delete the tweets and make clear his opposition to all sorts of racism and hatred.”
With Trump sharing tweets with 43.6 million followers political comment was swift.
With Prime Minister Theresa May on an overseas trip, a Downing Street spokesman said Britain First used “hateful narratives which peddle lies and stoke tensions”.
He continued, “British people overwhelmingly reject the prejudiced rhetoric of the far right which is the antithesis of the values that this country represents – decency, tolerance and respect.”
Regarding Trump, the spokesman added: “It is wrong for the president to have done this.”
Labour’s Jeremy Corbyn called the retweets “abhorrent” and “dangerous”.
White House spokeswoman Sarah Sanders said Mrs May and other world leaders knew videos highlighted “real threats that we have to talk about”.
“Whether it’s a real video, the threat is real,” she added.
The Muslim Council for Britain called on the Prime Minister’s government to “distance” itself from the comments.
“This is the clearest endorsement yet from the US president of the far-right and their vile anti-Muslim propaganda,” a spokeswoman said.
31-year-old Fransen appears at Belfast Magistrates’ Court in December following her arrest by the Police Service of Northern Ireland in London on Saturday charged with using “threatening, abusive or insulting words or behaviour” at a Northern Ireland Against Terrorism rally at Belfast City Hall in August.
Former members of the British National Party founded Britain First in 2011.
Members, who failed to secure seats at European elections, had a 1.2% vote at the last London mayoral elections.