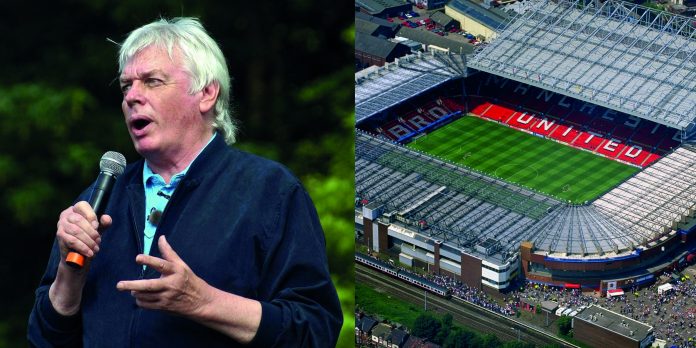 At the eleventh hour, it has emerged that today, Friday 17th November, Manchester United will welcome antisemitic conspiracy-theorist David Icke. The location for “An evening with David Icke” had been a closely guarded secret until two tickets with a face value of £85 each were spotted on eBay and reported to Campaign Against Antisemitism by actor Marlon Solomon and Sussex Friends of Israel.

David Icke is a modern-day antisemitic hate preacher who uses social media, his books and his stage performances to incite hatred towards Jewish people. His preaching is so absurd that since the 1990s he has been dismissed as a crank, but because he is dismissed there has been no major opposition to him and he has built up a following of thousands upon thousands of disciples whom he has persuaded to adamantly believe that the world is in the grip of a conspiracy run by the “Rothschild Zionists”.

His repertoire includes conspiracy myths and tropes classified as antisemitic in the International Definition of Antisemitism, adopted by the British Government, including: “making mendacious, dehumanising, demonising, or stereotypical allegations about Jews as such or the power of Jews as collective — such as, especially but not exclusively, the myth about a world Jewish conspiracy or of Jews controlling the media, economy, government or other societal institutions” and “accusing Jews as a people of being responsible for real or imagined wrongdoing committed by a single Jewish person or group, or even for acts committed by non-Jews.”
David Icke’s antisemitic views have resulted in some venues cancelling bookings for his show in 2018. Central Hall in Southampton and St Andrew’s Hall in Norwich have both taken a highly principled stand. North West Friends of Israel have also been successful in causing the cancellation of Mr Icke’s events at the Lowry Hotel in Salford, Sheffield City Hall and the Gladstone Theatre in Wirral. It is disgraceful therefore that one of the country’s pre-eminent sporting institutions is willing to provide him with a platform. The Premier League is a funder of Kick It Out, professional football’s equality and inclusion organisation.

Stephen Silverman, Director of Investigations and Enforcement for Campaign Against Antisemitism, said: “David Icke is an antisemitic hate-preacher who peddles the some of the same conspiracy theories that led to the Holocaust. Consequently, venues are increasingly cancelling or refusing to accept bookings for his shows. It is shocking that Manchester United, one of the country’s most iconic sporting institutions is willing to give him a platform, whether he intends to use it to promote his repugnant views about Jews or not. The directors of Manchester United have claimed to back the ‘Kick It Out’ campaign to kick racism out of football, and if their words are to be believed then they must now act to cancel this event.”