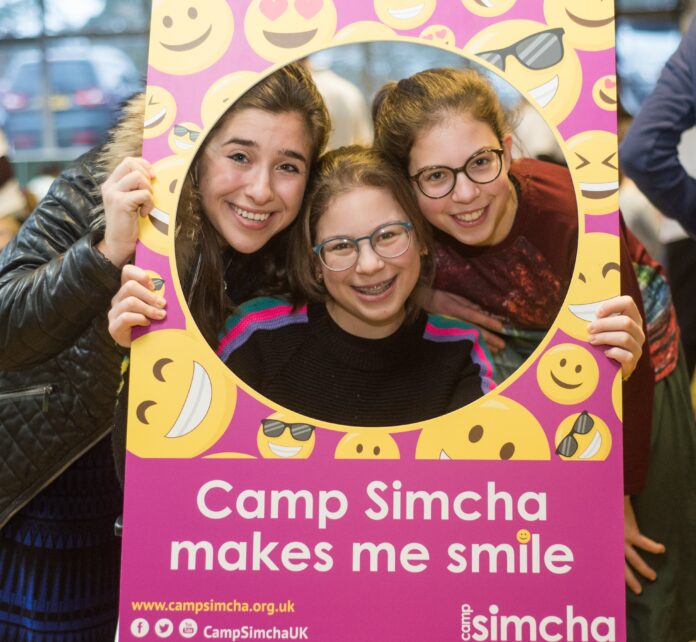 A group of youngsters with serious illnesses enjoyed a weekend away with Camp Simcha, packed with fun and a rare taste of the independence their conditions often prohibit.

Ranging in age from 6-18, they spent a wonderful few days enjoying activities from archery and bowling to rock climbing and a fire and light show.

With all their care needs catered for and medical staff on site, their parents could enjoy some vital respite knowing that their children were having a great time alongside Camp Simcha staff and the charity’s Big Brother and Big Sister volunteers.

Among the volunteers this time was Suri Friesel.

No stranger to retreat – Suri, now 18, attended many when she was a child supported by Camp Simcha, but this was her first as a volunteer.

Suri and her family came to Camp Simcha after she was diagnosed with Hodgkin’s Lymphoma in 2017 –  on her 13th birthday.

“Camp Simcha stepped in and supported us in so many ways, including a volunteer for me and for my sibling,” says Suri, from North London.

“I went to lots of retreats which were amazing, as well as Camp USA. I wanted to be a volunteer even while I was being supported by Camp Simcha and having treatment. I didn’t want to always get, I wanted to give as well.”

No longer needing Camp Simcha’s support, that opportunity finally came when Suri turned 18 and became a volunteer for the charity, which provides practical, emotional and therapeutic support to families with seriously ill children.

Suri, who now works part-time as a phlebotomist and also teaches, says: “I now support the sibling of a child who is ill, and also went to my first retreat as a volunteer.

“I had always enjoyed retreat as a child. It was somewhere I felt able to be myself and where I could take part in all the activities even when I was in a wheelchair.

“But it felt really good to be there as a volunteer and have that feeling that I had come out the other side. I also hope that it was encouraging for the children who are on retreat now.”