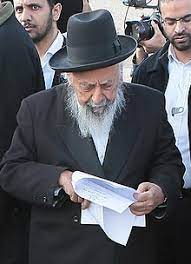 The world of Torah has lost a tremendous scholar following the death of HaGaon HaRav Shimon Baadani zt”l yesterday in Israel.

Spiritual leader of the Shas Party since 1984, Baadini, 94, was a renowned rabbi in the Sefardi community. He headed up Shas’ Council of Torah Sages.

Prime Minister Benjamin Netanyahu described Baadani as a “great scholar and spiritual leader”. President Isaac Herzog tweeted that his death was a “huge loss to the world of Torah”.

Outspoken in Israeli politics, Baadini served Ehud Barak’s government at the turn of the Millenium.

Shas said in a statement they were “shocked, pained and devastated over the ascent in a whirlwind to heaven.”

Interior Minister Aryeh Deri wrote on Twitter: “Woe is the ship that has lost its captain.”

Thousands of mourners attended the funeral which began at Kollel Torah V’Chayim in Bnei Brak, which he co-founded.

The esteemed rabbi was buried beside his Rebbetzin, Shulamit Abadai at Ponevezh Yeshiva Cemetery.

Baadini had been ill for a number of months and passed away at Sheba Hospital in Tel Hashomer.

Born in Hadera in 1928, he was the 11th child of Rabbi Dovid and Chaviva Badani. Two sons and a daughter survived of 10 children born in Yemin.

After the Old City building was destroyed, Baadini set up a branch of the yeshiva in Katamon, which became independent. A respected scholar, Baadini went on to lead many yeshivas in Israel and founded V’Chaim with Rabbi Moshe Pardo.

Renowned for inciteful advice, he was known for his involvement in shidduchim, assisted widows financially and provided tefillin to orphaned boys at barmitzvah.

Baadani and Shulamit Abadai had seven children. Their sons are Rabbi David Yeshaya Baadani who is rosh kollel of Kollel Taharot in Jerusalem, Rabbi Moshe Baadani is a study group leader at the kollel and Rabbi Chaim Baadanim is director of Torah V’Chaim institutions.

For generations of Baadini’s students and Sephardi communities in particular his loss is incalculable.