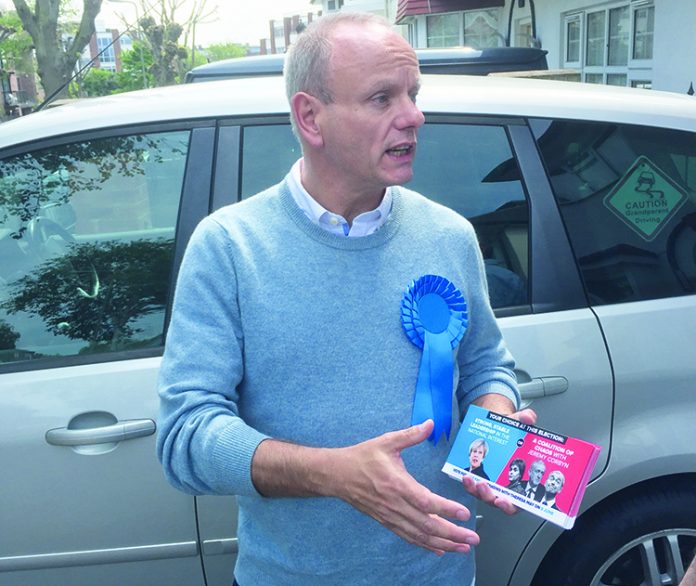 With less than four weeks before perhaps the most important general election in twenty years, party helpers were out in their droves along with their party candidates knocking on doors and hoping to turn out the vote on 8 June.

In Finchley and Golders Green, Conservative candidate Mike Freer said he felt good about the response he received on the doorsteps. The heart of the Orthodox community in Golders Green was targeted last Sunday which is generally 90% safe Conservative. Elsewhere the Labour candidate Jeremy Newmark was out with his team drumming up support for a second referendum on the Brexit terms. Mr Newmark who is a former communications director for the Chief Rabbi believes he would be in a better position to fight anti-Semitism within the Labour party if he were to become an MP.

Not far away in Hendon, Conservative candidate Mathew Offord said he was extremely happy with the way his campaign was going. Conservative councillors from the Hendon constituency joined Mr Offord knocking on doors on what turned out to be a very warm Sunday in the sunshine.

The Labour candidate Mike Katz was in West Hendon and said many people backed his way forward and were against what Mr Katz described as a “Tory hard Brexit.”

Over in Hackney North and Stoke Newington which covers the area of Stamford Hill’s strictly Orthodox community, the Conservative Party selected Amy Gray as their candidate. Ms Gray ran in 2015 against Diane Abbott and although came second – she was behind by 24,008 votes.

Amy Gray admitted she voted to remain in last year’s referendum, but now that the country has voted to leave the EU, “We need to accept it and get the best deal for our county – and only Theresa May can deliver that.” She added “there is a clear choice between a leader who can be trusted and a Jeremy Corbyn who would be propped up by a coalition of chaos.”

Ms Gray comes from a military family and explained how her father was in the British armed forces at a time when the IRA regularly targeted soldiers. “Jeremy Corbyn cosy’s up to people who want to kill my Dad,” she said and also mentioned the infamous Corbyn words “my friends,” when he referred to the radical Jihad groups Hamas and Hezbollah.

Members of the Stamford Hill Conservative Association visited the Golders Green Conservatives on Sunday to learn how to canvass and talk to voters on the doorsteps. They will certainly have their work cut out for them in North Hackney and Stoke Newington because to overturn the 24,008 majority of Diane Abbott, would be one of the greatest victories on election night.