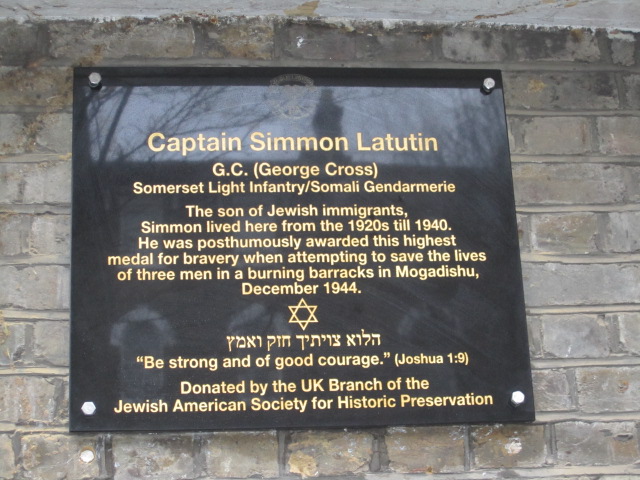 The life of Capt. Simmon Latutin GC has been commemorated with a plaque outside his home in Camden Town, London.

AJEX Archivist Martin Sugarman is behind the initiative financed by Jerry Klinger of the Jewish American Society for Historic Preservation.

Latutin was born on July 25th 1916. The son of immigrant tailors Moses and Fradel Kraftcheck, Simmon showed musical talent from a young age on violin, and later viola, and attended the North London Polytechnic School (1931-33).

Aged 16, he won the Westmoreland scholarship to the Royal Academy of Music to study violin. And within four years he was playing for the London Symphony Orchestra.

Married 15th March 1940, Simmon was called up within four months and eventually posted to the Somerset Light Infantry at Donnington. In April 1943, Latutin was posted to former Italian Somaliland, in East Africa then Mogadishu to command an infantry training school for troops about to go to Burma. Promoted to Acting Major, then Captain in 1944, he entertained Jewish servicemen on a Friday night in his quarters.

In December 1944, he was hospitalised with a tropical ulcer in Nairobi before returning to Mogadishu.

Following a huge explosion, Latutin pulled two men out from a store, other soldiers pulled him away badly burnt. The two MP’s died on the day, Latutin succumbed on December 30th.

Records show that an order in 1942 instructed Italian rockets to be dumped at the site as unstable but the order had not carried out. It is believed hobnail boots of the men sparked the explosion.

In 1946, a letter was sent from Brigadier D H Wickham, Chief British Army Administrator in Somalia, to Civil Affairs Branch in Nairobi about the incident at Mogadishu.

Eighteen months after his death. Margaret received a letter stating her late husband would receive a George Cross in recognition of his supreme courage.

The medal is on permanent loan to the SLI regimental museum in Taunton.

Latutin is remembered on various memorials including at Constitution Hill, the Royal Academy of Music War Memorial, at Golders Green synagogue, on a Roll of Honour at Pinner Synagogue, in Somerset Light Infantry and Jewish Military (Hendon) Museums.

Latutin’s grave was moved to Nairobi Commonwealth War Graves Cemetery. Inscribed on the foot is Margaret’s tribute: “We can never forget your unselfish courage in true service to mankind”.