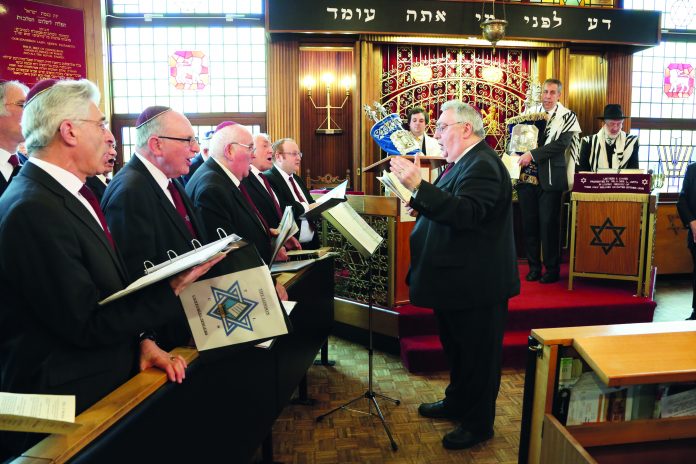 Last Sunday Catford and Bromley Synagogue celebrated its Golden Anniversary of the Synagogue and the Rededication of two Sifrei Torah.
The Synagogue was full with representatives from both Lewisham Council including the Mayor Sir Stephen Bullock, Councillors from Lewisham and Bromley, CEO of the United Synagogue Dr Stephen Wilson and other US Trustees, Local MP’s, many other Faith Leaders and representatives from Synagogues from all over London .The service was conducted by Rev David Rome accompanied by The London Cantorial Singers. The Synagogue Chairman Mr Joe Burchell FCL spoke of Catford being the only Orthodox Synagogue in South East London still being very vibrant catering for all the community young and old and how proud he was that there were over 30 children in the Cheder. There was also a Friendship Club which provided a kosher 3 course lunch once a week.
Mr Burchell made a special presentation to Sir Stephen Bullock for his and Lewisham Councils support of the Jewish Community and other Faith Groups in his long period of office. Sir Stephen replied confirming that Lewisham a Labour Council had and would always support the Jewish Community as well as all the other many different faiths in the Borough . It was truly a very memorable event.