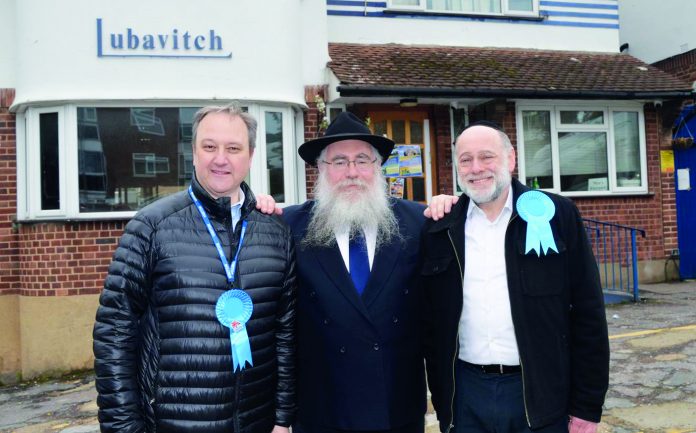 One of the most marginal Wards in the London Borough of Barnet is Hale, which, broadly speaking, comprises a large part of Edgware, and parts of Mill Hill and Burnt Oak. Its Jewish population, especially young orthodox families, has increased considerably over the past few years, and much of it is within the Edgware eruv.
Hale is currently a “split ward”, represented by two Conservative Councillors and one Labour. None of the three is standing again in the election this week. One aspiring Hale Conservative candidate, who is Jewish and an active member of Mill Hill United Shul, is financial adviser and family man Elliot Simberg.
Like many other Jewish politicians, Mr Simberg is concerned about the direction of the Labour party and its ongoing issue of antisemitism under the leadership of Jeremy Corbyn. He said “ The current situation within Labour places Jewish people in a no win situation. If the local elections show an overall majority for Labour, Corbyn’s attitudes and actions are bound to create feelings of anxiety within the UK’s Jewish communities. If the Conservatives gain more votes, some sections of the electorate are likely to conclude it was due to the strength of the Jewish vote. “This situation will inevitably make the Jewish community feel vulnerable.”
Mr Simberg added that since the Conservatives currently control the council by a single seat, this time it’s even more important that everyone who is eligible to vote should do so. Some local Rabbonim have encouraged the Edgware and Hale community to exercise its democratic right to vote, as Rabbi Sudak openly recommended to the Lubavitch Kehillah in Edgware last Shabbos, Rabbi Lieberman at Edgware Adath. and Rabbi Schneebalg at Edgware Machzikei Hadass.
“We have been campaigning hard to retain our two existing Conservative seats and to gain the third in Hale” said Mr Simberg. “What happens in thiscWard could well be crucial in determining which party will be in control of Barnet this Friday morning”.