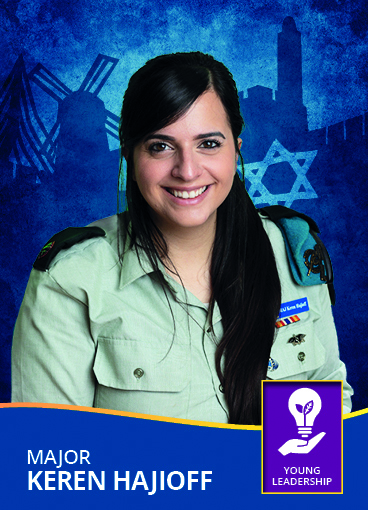 A former Hasmonean student who made Aliyah and became a Major in the Israeli Army, has won the 2018 Sylvan Adams Nefesh B’Nefesh Bonei Zion Prize for Young Leadership.
Major Keren Hajioff, who will be celebrating her 28th birthday next week is now a senior figure in the IDF’s diplomacy unit.
A month after moving to Israel, Keren joined the Israel Defence Forces, serving as an Instructor in the Artillery Corps.
Keren was selected for the IDF Officers’ Training School, finishing as the Exemplary Cadet of her company. Having earned the rank of Lieutenant, Keren was assigned as an Instructing Officer in the officers’ training school, training the future generation of IDF officers.
From there, she took up the position of Head of Information and Policy in the Ground Forces Foreign Relations Branch. Keren then became the Foreign Relations and International Student Officer at the Israel National Defence College, where she was promoted to the rank of Captain a year early, in a procedure of Excellence in Conduct.
Keren is currently serving as the Head of Public Diplomacy in the IDF Spokesperson’s Unit, as well as completing a degree in Political Science and was thrilled with her recent promotion to the rank of Major. She told The Jewish Weekly, ‘ I feel privileged to have been able to contribute to the State of Israel – this award is a reminder of that honour. I feel humbled.’