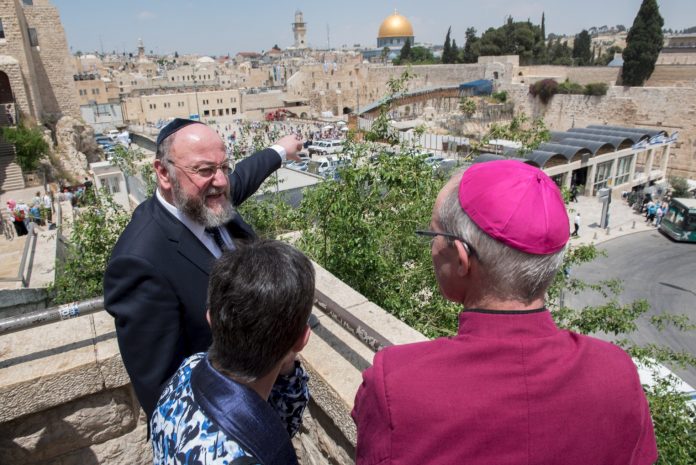 Chief Rabbi Ephraim Mirvis this week went on a momentous trip around Israel with the Archbishop of Canterbury Justin Welby. As well as taking in the Kotel and Old City, other destinations included Yad Vashem, which was described as an essential part of the Archbishop’s mission of reconciliation.

“The Archbishop of Canterbury’s presence here in Jerusalem and his prayers for peace and reconciliation, particularly at Yad Vashem and the Western Wall, are indicative of historic, positive developments in the Anglican Jewish relationship.

I would so love to send a message of hope back through the annals of history – to Clifford’s Tower in York, to the medieval communities who endured the scourge of the blood libel and to those whose lives were devastated by the Crusades – to let them know that a Chief Rabbi and an Archbishop of Canterbury would one day pray alongside one another, as close friends, in the holy City of Jerusalem.

That the Archbishop would make time, in what is an exceptionally busy schedule, to see the State of Israel as I see it – a priceless Divine gift, which brought deliverance to the Jewish world after centuries of prayer and yearning, is a testament to the high regard in which he holds the Jewish community.”