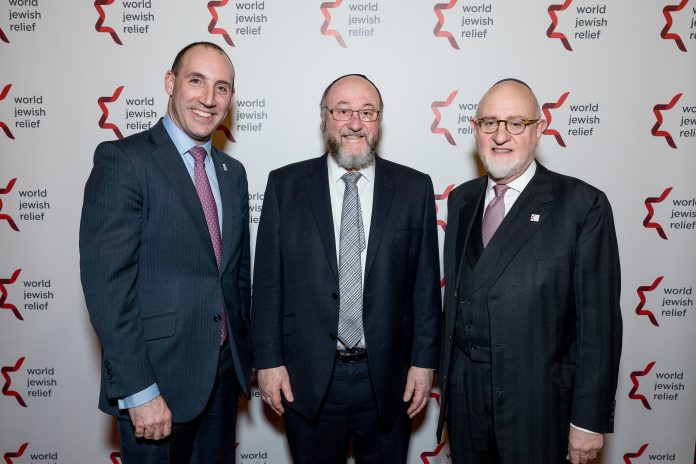 The situation for Ukraine’s Jews was brought sharply into focus this week. Guests at World Jewish Relief’s Annual Dinner heard about some of the challenges facing the Jewish community there and the difference the charity has made in the past year.

The dinner was hosted by art historian, writer and broadcaster Jacky Klein who told guests how she wouldn’t be alive today were it not for the British Jewish community supporting her grandfather when he fled the Nazis and arrived in the UK in 1939.

Keynote speaker Philippe Sands QC told 500 diners how the charity had also helped his family when they fled the Nazis to begin a new life in Britain. “It is an honour to be here tonight to support this extraordinary organisation,” he said. He spoke about his book East West Street and revealed that he had discovered the history of Lviv-born Raphael Lemkin, the Jewish lawyer who coined the term ‘genocide’, while researching a talk he had been asked to give at the University of Lviv in Western Ukraine. “I ended up teaching them that one of the most prominent figures in human rights history was not only from Lviv but had studied at the very university where I was now lecturing,” he said.

World Jewish Relief’s Chair, Dan Rosenfield, told supporters that he was sounding the alarm bell for Ukraine’s Jewish community. “Let it ring in our ears. The vulnerability, poverty and despair I have seen with my own eyes in places like Kiev and Kharkov cannot go on. We have two choices: we can stand back, we can say our Jewish family should abandon their homes, the homes of their mothers and fathers, and move to Israel. For some that might be the answer, but for others it’s not. Or we can take responsibility and act. World Jewish Relief is about action. We are about the here and now, changing Jewish lives across Eastern Europe.”

Chief Rabbi Mirvis, appearing in the fundraising video, said: “Giving [tzedakah] is central to our Jewish identity. Each and every one of us has it within our power to give in a remarkable way: to enrich lives, to help lives and to save lives.”

Guests were told how in the past year World Jewish Relief has supported 42,899 people across 19 countries, repairing 327 Jewish homes, providing homecare for 2,397 older Jews and helping a further 7,086 people gain employment.

The event raised more than £1.2m to benefit the world’s poorest Jews. Donations will support 18,000 older Jews with homecare and welfare programmes and put another 3,000 people through World Jewish Relief’s livelihood programmes to find a job and break the cycle of poverty forever.

World Jewish Relief’s Chief Executive, Paul Anticoni, said: “I never fail to be bowled over by the kindness of World Jewish Relief’s supporters. On Monday evening they heard the challenges facing the world’s most vulnerable Jewish communities and they responded so generously. We could not do any of the life-saving and life-changing work without their support and I want to thank each and every one of them on behalf of the Jewish communities we support in Belarus, Georgia, Moldova and Ukraine.”