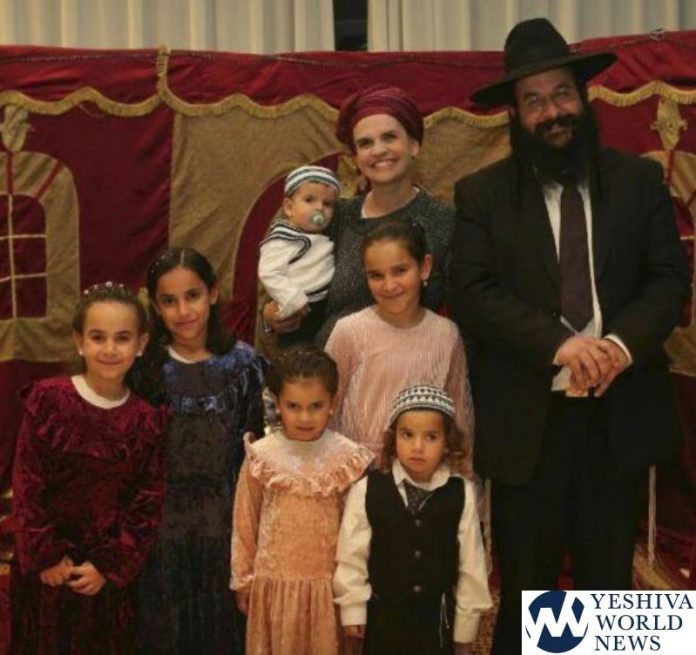 The Israeli Defence Forces have intensified efforts to apprehend an Israeli-Arab who stabbed a 29-year old father of four to death in the West Bank city of Ariel on Monday afternoon.
The Palestinian suspect – captured on surveillance footage carrying knives – critically injured Itamar Ben-Gal in a shocking attack whilst he was waiting at a bus stop in Ariel Square at Tapuach Junction, a popular hitch hiking-spot near Jerusalem Boulevard outside Ariel.
An off-duty IDF officer witnessed the assault and pursued the suspect, striking him with his vehicle twice. But the killer fled towards the Palestinian village of Kifl Haris, the Israel Defence Forces said.
The IDF immediately launched a manhunt for the Arab citizen from Jaffa.
MDA and IDF paramedics tried to resuscitate the father of four at the site, the victim was evacuated in critical condition to Beilinson Hospital in Petah Tikvah but was pronounced dead from multiple stab wounds to his upper body shortly after arriving at the medical centre.
Ben-Gal, who lived in the settlement Har Bracha, taught at Bnei Akiva Yeshiva in Givat Shmuel and Har Bracha Yeshiva.
Prime Minister Benjamin Netanyahu made his intentions clear when offering condolences to the victim’s family.
“IDF and Shin Bet forces are in pursuit of the terrorist or terrorists and we will bring them to justice,” he said. “These are difficult moments, but are people come together during such times.
“I fully trust security forces, which are doing an outstanding job of protecting us,” the prime minister concluded.”
Ariel Mayor Eli Shaviro appealed to Netanyahu, government ministers and Knesset parliamentarians to respond by annexing settlements in the area.
“You have the responsibility to prevent the next terror attack,” he said. “Apply sovereignty.”
Ben-Gal’s death is second time in recent weeks an Israeli has died in a terror attack in the region.
Rabbi Raziel Shevach, a father of six, was shot dead by Palestinians as he drove near his Havat Gilad home on January 9.
Shevach and Ben-Gal knew each other.
West Bank Regional Council head Yossi Dagan said the murders were unacceptable.
“I cannot look more into the eyes of bereaved families,” Dagan commented.
“It is not enough to chase terrorists. The terror infrastructure must be dealt with.”
Dagan called on the IDF to restore checkpoints removed as a humanitarian gesture to Palestinians in the West Bank.
“The heart breaks,” Defense Minister Avigdor Liberman tweeted.
“It’s only a matter of time before security forces will close accounts with the murderer.”
Israeli president Reuven Rivlin tweeted that he was “deeply saddened” by the terror attack.
“We all send comfort and strength to his widow, his four young children, his family and his students, who will never forget him,” he noted.
ZAKA Commander in the Shai region, Gil Bismut, confirmed details of the stabbing.
“I and my fellow ZAKA volunteers remained at the site to clear the area of human remains to ensure a full Jewish burial,” he said.
The killing has brought condemnation around the world.
In the United Kingdom, Board of Deputies senior Vice President Richard Verber described the attack as a “brutal and cold blooded murder,”
“We call on the Palestinian Authority to condemn this appalling attack and to end its daily incitement of terrorism against Israeli civilians, he said.
Chief Rabbi Ephraim Mirvis tweeted: “Whilst the murder of Itamar Ben-Gal earlier today, will likely receive little attention in the international press, we will continue to grieve following each and every one of these wicked acts of terrorism. May his memory be for a blessing.”
There has been a surge in violence since US President Donald Trump’s recognition of Jerusalem as Israel’s capital on December 6.
Palestinian state media reported that Israeli forces had raided the village of Al-Lubban al-Sharqiya, south of Ariel, resulting in clashes.
Hamas sickeningly praised the attack.
“The stabbing attack is proof that the Al-Quds intifada continues,” the group said.
Sources (Yeshiva World News, Jerusalem Post, Israel National News, AFP)